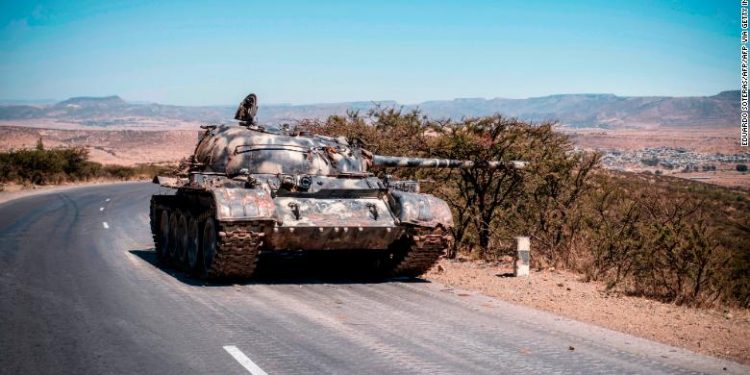 The leader of Ethiopia’s northern Tigray region announced a withdrawal of rebel forces from neighboring areas in the country on Sunday, a move that could signal the possibility of a ceasefire after 13 months of war.

In a letter to UN Secretary-General Antonio Guterres and UN Security Council President Abdou Abarry, dated Sunday and seen by CNN on Monday, Debretsion Gebremichael, the leader of Tigray’s region, said he had “ordered those units that are outside the borders of Tigray to withdraw to the borders of Tigray with immediate effect.”

Having heard the call to withdraw from both the international community and the Ethiopian federal government, Gebremichael said the Tigray People’s Liberation Front (TPLF) trusted that “their bold act of withdrawal will be a decisive opening act for peace,” adding he hopes to commence peace negotiations following the cessation of hostilities.

Tigrayan forces and Ethiopia’s federal government have been engaged in conflict since November 2020, when Ethiopian Prime Minister Abiy Ahmed ordered a military offensive in Tigray following lengthy disputes over the governance of the region.
The fighting has left thousands dead, displaced more than 2 million people, fueled famine and given rise to a wave of atrocities.

Abiy has denied civilians were being harmed or that soldiers from neighboring Eritrea had joined the fight, but reports from international observers, human rights groups and CNN have uncovered multiple atrocities.

In Sunday’s letter, Gebremichael asked the UN diplomats to give their “full backing to an immediate cessation of hostilities followed by negotiations,” and called on the UN Security Council to “establish a mechanism to ensure the immediate and veritable cessation of all forms of hostilities” and “the total withdrawal of all external forces” in the region.

The Tigrayan leader also requested the establishment of a no-fly zone for hostile aircraft over Tigray, with the exception of humanitarian and civil purposes, as well as the imposition of arms embargoes on Ethiopia and Eritrea.

In the letter, Gebremichael also expressed a deep disappointment that the international community — including the United Nations — did not find a way to ensure food supplies made it into the region over the course of the conflict.
“We trust that you and the Security Council will redouble your efforts to ensure that the war crime of starvation is stopped, and aid provided,” Gebremichael said.

TPLF spokesperson Getachew Reda said in a Monday tweet that by withdrawing, “we believe we have taken away whatever excuse the international community has to explain its feet-dragging when it comes to putting pressure on Abiy Ahmed & his regional partners in crime to stop their genocidal campaign in Tigray.”

Last Friday, the UN Human Rights Council voted in a special session to establish a commission of human rights experts on the Ethiopia conflict — a move that the Ethiopian federal government said it would not cooperate with.

Meanwhile, the United Nations’ decision was embraced by the Tigrayan regional leadership, who said it is “encouraging to learn that the Council has finally subscribed to the reality that the Abiy regime is only looking for impunity for all atrocity crimes committed under international law that have been committed under his direct command.”

The Ethiopian federal government could not be immediately reached for comment.
Reda also condemned Eritrea’s involvement in “recent engagements in Afar & Amhara,” calling on the international community to put pressure on the “repeat offenders gagging for yet another round of genocide in Tigray.”

Last week, the United States voiced its concerns regarding reports of mass detentions, killings and forced expulsions of ethnic Tigrayans at the hands of Amhara security forces in western Tigray, urging local leaders to renounce the violence. It also reiterated its call for Eritrea to withdraw its forces entirely from Ethiopia.