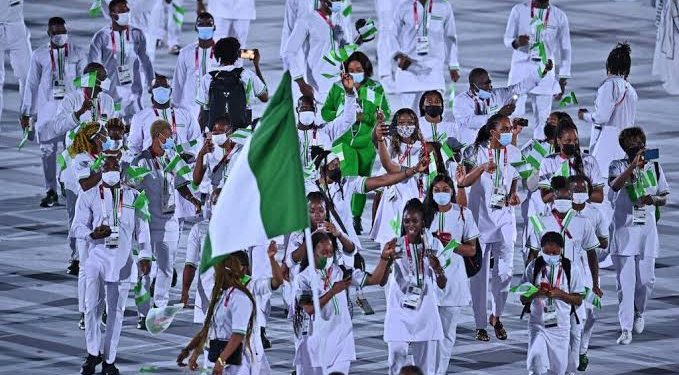 As the biggest sports event climaxed, today, USA raced ahead of China to sit at the top spot in the Tokyo Olympics medals.

Nigeria finished in 74th place out of 205 teams, as she exits with two medals in her kitty.

Ese Brume, rewarded the country’s faith in her by winning a bronze medal in the women’s long jump event followed by Blessing Oborududu who won a silver medal in wrestling after losing to America’s Tamyra Mensah-Stock in the final.

Also, the United States scored victories in volleyball, track cycling and basketball to top the medals tally with 39 golds, just one ahead of China.

The 339th and final gold medal went to Serbia’s men’s water polo team, capping a Games that were in stark danger of cancellation after they became the first postponed Olympics last year.

Thirty-three sports have been contested across 16 days in largely empty stadiums, with fans barred over coronavirus risks and athletes living in strict biosecure conditions.

“What we have seen here is that on the contrary the athletes have brought soul to the Olympic Games.”

The Olympics were plagued by low Japanese support over super-spreader fears but officials maintained that a record haul of 27 gold medals, putting Japan third on the table, has won hearts.

Britain finished fourth with 22 golds and the Russian Olympic Committee, the team for Russian athletes after Russia were banned for systematic doping, were fifth with 20.

A succession of big names have failed to perform in Japan, where new sports skateboarding, surfing, sport climbing and karate have brought young new stars to the fore.

“I know there were a lot of people against holding this Olympics due to the coronavirus,” said a flag-waving, 47-year-old fan on the marathon route who gave his name as Tsujita.

“But I am glad it took place. This was a once-in-a-lifetime experience for everyone.”

The marathon, which moved north to Sapporo to avoid Tokyo’s summer heat, was one of the few events to allow spectators.

Sunday’s closing ceremony will take place at a largely vacant Olympic Stadium, rounding off an extraordinary Games conducted mostly without live spectators for a worldwide audience of billions.

Fears of a major outbreak proved unfounded in the mostly vaccinated Olympic contingent and 430 cases were picked up during the Games, including 32 in the Olympic Village.

But athletes had the added pressure of strict ‘bubble’ conditions including orders to wear masks unless competing, training, eating or sleeping.

Victory celebrations have been low-key, with lonely laps of honour and sparsely attended medal ceremonies. But the emotions of the competitors have been on full view.

The Olympic flag will now pass to 2024 hosts Paris. But the circus will reconvene in just six months when Beijing, faced with boycott threats and a renewed coronavirus emergency, holds the Winter Games in February.