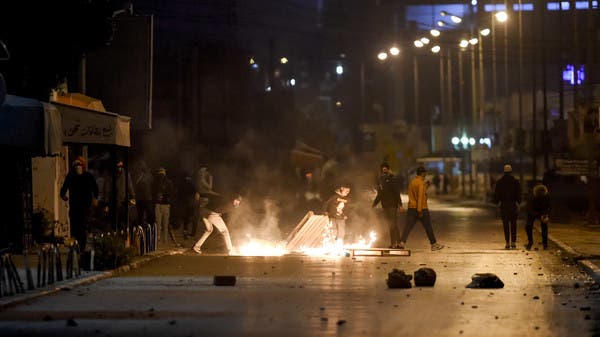 Tunisian authorities say they arrested at least 240 youths as violent clashes between police and protesters broke out.

Riots and violent clashes between Tunisian police and protesters broke out on Sunday in the capital Tunis and several other cities for the second consecutive day, while security forces arrested dozens of young people.

The disturbances came as the country faced an unprecedented economic crisis and a nationwide lockdown imposed since Thursday as part of efforts to rein in surging coronavirus infections.

Internal Security Forces spokesman Walid Hkima said riot police had arrested 242 people, mostly teenagers and children who vandalised property and tried to rob shops and banks overnight and during the day on Sunday in several cities.

A decade on from a revolution against poverty, corruption and injustice, Tunisia has progressed towards democracy but its economic problems have worsened, with the country on the verge of bankruptcy and public services in a dire situation.

The key tourism sector, already on its knees after a string of deadly armed group attacks in 2015, has been dealt a devastating blow by the pandemic.

Tunisia has registered more than 177,000 coronavirus cases, including more than 5,600 deaths from the disease.

The protesters made no clear demands in demonstrations – which authorities described as riots – in at least 10 cities around the country.

In the run-down Ettadamen area of the capital, protesters – most of them teenagers – blocked roads and threw stones at police. Police fired water cannon and tear gas to disperse them on Sunday.

Clashes also spread to the Mnihla area of Tunis.

The protests pose a challenge for the government of Hicham Mechichi, who has reshuffled his cabinet amid a continuing battle for political influence.

Rural central and southern regions of the country remain flashpoints for rioting.

Witnesses told the Reuters news agency that protests were held on Sunday in the central towns of Sbeitla and Kasserine, where police chased the protesters and fired tear gas.

In Jelma town in the governor of Sidi Bouzid, police dispersed youths who blocked roads and burned tyres to protest against their marginalisation and poverty.

Other protests were held in the cities of Ras Djbel, Ksar Hlel and Beja.