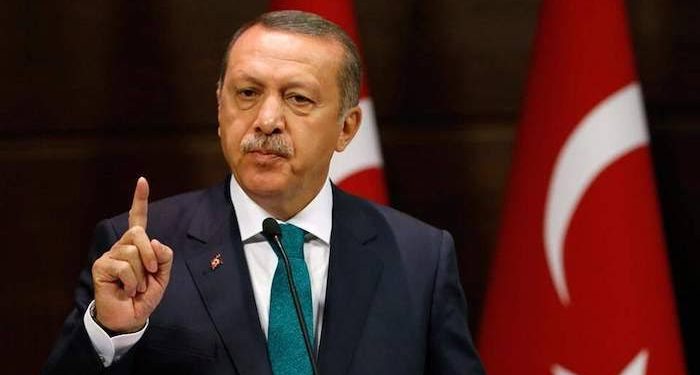 Envoys of the US, Germany, Canada, Denmark, Finland, France, the Netherlands, New Zealand, Norway and Sweden called for release of businessman and philanthropist Osman Kavala.

Turkish President Recep Tayyip Erdogan moved to expel the ambassadors of 10 Western countries who appealed for the release of a jailed civil society leader.

Seven of the ambassadors represent Turkey’s NATO allies and the expulsions, if carried out, would open the deepest rift with the West in Erdogan’s 19 years in power.

“I have ordered our foreign minister to declare these 10 ambassadors as persona non grata as soon as possible,” Erdogan said on Saturday, referring to a term used in diplomacy that signifies the first step before expulsion. He did not set a firm date.

Philanthropist Osman Kavala has been in prison since late 2017, charged with financing nationwide protests in 2013 and with involvement in a 2016 failed coup. He denies the charges.

“They must know and understand Turkey,” Erdogan added, accusing the envoys of “indecency”.

“They must leave here the day they no longer know Turkey,” Erdogan said.

The envoys had issued a highly unusual joint statement on Monday saying the continued detention of Parisian-born activist Osman Kavala “cast a shadow” over Turkey.

The US, Germany, Canada, Denmark, Finland, France, the Netherlands, New Zealand, Norway and Sweden called for a “just and speedy resolution to [Kavala’s] case”.

Kavala has become a symbol of the sweeping crackdown Erdogan unleashed after surviving the coup attempt.

Speaking to the AFP news agency from his jail cell last week, Kavala said he felt like a tool in Erdogan’s attempts to blame a foreign plot for domestic opposition to his nearly two-decade rule.

Kavala said on Friday he would no longer attend his trial as a fair hearing was impossible after recent comments by Erdogan.

The Council of Europe, the continent’s top human rights watchdog, issued a final warning to Turkey to comply with a 2019 European Court of Human Rights order to release Kavala pending trial.

If Turkey fails to do so by its next meeting from November 30 – December 2, the Strasbourg-based council could vote to launch its first disciplinary proceedings against Ankara.

European Parliament President David Sassoli tweeted: “The expulsion of 10 ambassadors is a sign of the authoritarian drift of the Turkish government. We will not be intimidated. Freedom for Osman Kavala.”

A source at the German foreign ministry also said the 10 countries were consulting with one another. German legislators called for a tough response.

“Erdogan’s unscrupulous actions against his critics are becoming increasingly uninhibited,” Bundestag vice president Claudia Roth told the dpa news agency. She said Erdogan’s “authoritarian course must be confronted internationally” and demanded sanctions and a halt to weapons exports to Turkey.

“The possible expulsion of 10 ambassadors, including the representatives of Germany and many of Turkey’s NATO allies, would be unwise, undiplomatic and would weaken the cohesion of the alliance,” lawmaker and foreign policy expert Alexander Graf Lambsdorff tweeted. “Erdogan can have no interest in that.”

Norway said its embassy had not received any notification from Turkish authorities.

“Our ambassador has not done anything that warrants an expulsion,” said the ministry’s chief spokesperson, Trude Maaseide, adding that Turkey was well aware of Norway’s views.

“We will continue to call on Turkey to comply with democratic standards and the rule of law to which the country committed itself under the European Human Rights Convention,” Maaseide said.

Danish Foreign Minister Jeppe Kofod said his ministry had not received any official notification, but was in contact with its friends and allies.

“We will continue to guard our common values and principles, as also expressed in the joint declaration,” he said in a statement.

The US said it was aware of the reports and was seeking clarity from the Turkish Ministry of Foreign Affairs.

New Zealand’s foreign ministry meanwhile said it would not comment until it hears “anything formally through official channels,” and added in an e-mailed statement that “New Zealand values its relationship with Turkey”.

Erdogan was quoted on Thursday as saying the ambassadors in question would not release “bandits, murderers and terrorists” in their own countries.