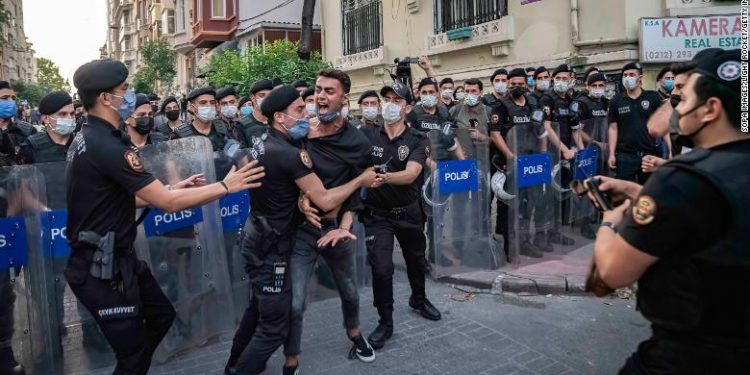 ISTANBUL, TURKEY - 2021/06/26: Police officers arrest a protester during the demonstration. Turkish police detained ten people who defied the ban on Pride parade, Bystanders reacting against the heavy-handed response were among the people detained. (Photo by Murat Baykara/SOPA Images/LightRocket via Getty Images)

Turkish police fired tear gas to disperse a crowd that gathered for a Pride parade in central Istanbul on Saturday, detaining some of those seeking to take part in an event banned by local authorities.

Reuters TV video showed police in riot gear pushing and dragging people, some waving rainbow flags as they assembled for the event in a side street off the city’s central Istiklal Avenue.Some 20 people, including a photo journalist, were detained, according to media reports.

Turkish authorities have repeatedly banned Pride events in recent years. Before then, thousands of people used to take part in the parade on the Istanbul street.

Turkey has long been a candidate to join the European Union but its accession process has been languishing for years amid tensions over a variety of issues including human rights.

On Thursday, a majority of European Union leaders vowed to continue combating discrimination against the LGBTI community in a joint letter amid a standoff with Hungary, whose parliament last week approved a bill that bans the distribution of material in schools deemed to promote homosexuality or gender change.