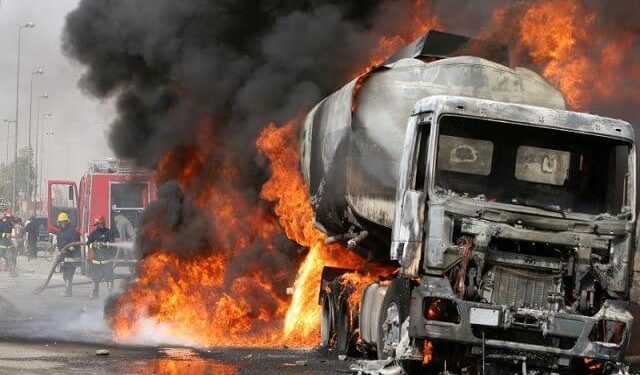 Two persons died, yesterday, while one other individual was seriously wounded as a petrol tanker exploded on the Lagos-Ibadan Expressway.

At least 14 vehicles were also burnt after the tanker went up in flames and ignited others around 6.20am at the Romona trailer park in the Ogere area of the expressway.

It was gathered that the incident involved eight tankers, three trucks and two cars.

Umar and Akinbiyi said in separate interviews that two persons lost their lives and one other was injured, while 13 vehicles were burnt.

Akinbiyi gave the breakdown of the burnt vehicles thus, “Six tankers, five of which were laden with PMS and one with diesel, as well as two others laden with gas were involved.

“Three trucks were also involved; one was empty, one was confirmed to be loaded with fish, while no one knew what the other one was conveying. Two cars were also consumed.”

The FRSC commander said, “We have diverted traffic to one lane; we have cleared the gridlock. Two persons were burnt beyond recognition and one person sustained injury and is receiving treatment at a hospital in Ogere.

“The cause of the accident was brake failure by one of the tankers conveying petrol. It hit another tanker laden with diesel and caught fire, which ignited the other vehicles.”

Akinbiyi said the incident should be a lesson to the people of Ogun State and Nigeria at large, especially those plying the routes.

He stated, “This is a lesson for people; if there is traffic and there is a tanker beside you, leave there quickly; the vehicle that fell down at midnight, which blocked the road, caused a lot of traffic and within the twinkle of an eye, one of the tankers trapped in the traffic burst into flames around 4am and the vehicles at the back just started catching fire.”

Meanwhile, the Ogun State Government has extended condolences to the families of the victims.

The Deputy Governor, Mrs Noimot Salako-Oyedele, who led officials on an on-the-spot assessment to the scene, sympathised with the families of the deceased and noted with regret the significant loss of human lives and property.

After taking briefs on the incident from the rescue agencies, she said there were two casualties from the resulting inferno, which caused serious gridlock on the road.

Salako-Oyedele expressed appreciation to the personnel of the emergency agencies, including the FRSC, the police, fire service and TRACE, who responded swiftly to the emergency and helped to curb the inferno from spreading beyond the 13 affected vehicles.