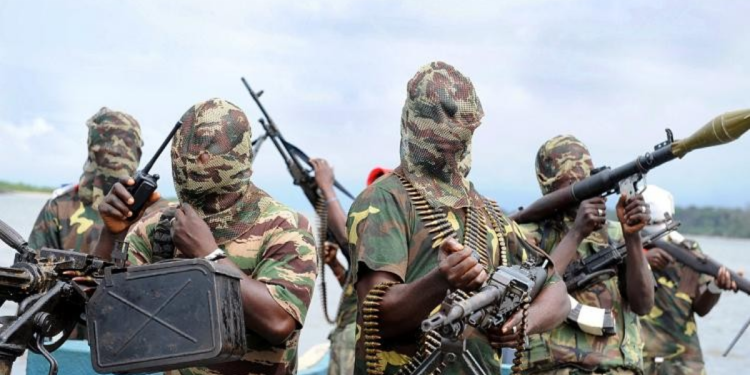 Two Nigerian soldiers, one nursing mothers and numerous Boko Haram terrorists have been killed, following a major attack on the Magumeri local government headquarters of Borno State.
Sources have revealed that Magumeri came under attack on Tuesday evening when a group of armed insurgents stormed the outskirts of the community in many trucks.
Soldiers of the Special Task Force in Magumeri, led by their Commander, Major Manga, were said to have saved the residents from yet another massacre.
“It would have been deadly, but for the swift arrival of Oga Manga and his troops,” said Bunu Bukar, an official of the state vigilante group, called Rapid Response Squad.
“The troops engaged them in a fierce fight that led to the death of many Boko Haram. A gun truck was recovered from the Boko Haram amongst many other arms and ammunition.”
According to the source said two soldiers paid the supreme price.
“We lost two soldiers in the fight, while one sustained an injury,” he said.
Other sources familiar with the incident confirmed that the insurgents had, before the arrival of the soldiers, burnt down a general hospital that was recently rebuilt and equipped by the Borno State Government.
The insurgents were said to have escaped with a tractor recently provided to the local government council by the Borno State government.
The source also said a nursing mother was killed after a stray bullet hit her during the shootout.

Similar Attack on Kukawa
The source confirmed that the attack on Magumeri coincided with another strike in Kukawa town of Borno state.
Kukawa is the local government area where Baga, a commercial fishing community, is located.
Borno State governor’s convoy was reportedly attacked in Baga about three weeks ago when unknown gunmen opened fire on his motorcade. The governor, Babagana Zulum, blamed soldiers of the Nigeria military for the assault. The military has since dismissed the allegation as false.
A security source confirmed “a serious attack” but could not immediately give details.
The source said: “We know many people were killed, but we cannot provide detailed figures until we get authentic information from our boys out there in Kukawa. Whatever you hear now, especially on alleged hoisting of flags by Boko Haram, is equal to rumours. “
Meanwhile, an online medium, Sahara Reporters had reported earlier that the Boko Haram terrorist had hoisted its flag in Kukawa, after seizing the territory. The military has not confirmed this.
A message sent to Sagir Musa, by our reporter seeking a confirmation of the incident in Magumeri, was not responded to at the time of filing this report.
Mr Musa, a colonel, is the Acting Director, Army Public Relations (DAPR).