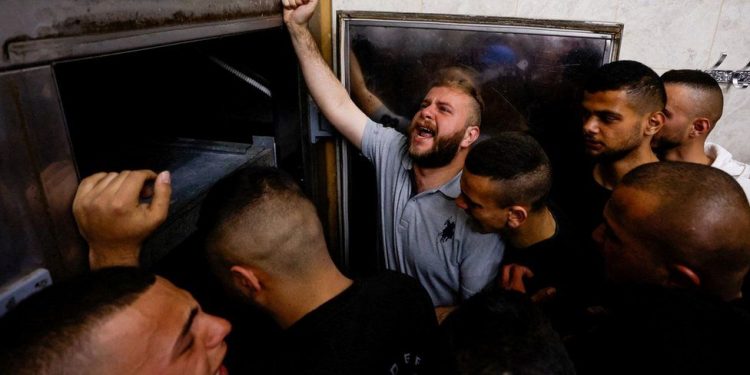 Two Palestinians have been killed in a gunfight that erupted during an Israeli raid in Jenin, in the occupied West Bank, Palestinian health officials say.

Israel’s military said soldiers entered the refugee camp to arrest three people suspected of involvement in a deadly attack in an Israeli city on Tuesday.

They came under fire from Palestinian gunmen and responded, it added.

Elsewhere in the West Bank on Thursday, an Israeli was stabbed and wounded by a Palestinian, who was then shot dead.

A total of 11 people have been killed in three attacks in Israel over the past two weeks, raising fears of what the country’s prime minister has called “a wave of murderous terrorism”.

The Israel Defense Forces (IDF) said soldiers and Border Police officers entered Jenin early on Thursday to apprehend individuals suspected of helping a Palestinian man from the nearby village of Yabad who shot dead five people on Tuesday in the Tel Aviv suburb of Bnei Brak.

The IDF said “a number of violent incidents” occurred during the raid. “Palestinian assailants fired toward the troops, who returned fire. Three assailants were hit,” it added.

The Palestinian health ministry said two young Palestinians – Sanad Abu Atiyeh, 17, and Yazid Saadi, 23 – were killed. Another 15 people were injured, three of them critically, it added.

The IDF said another person suspected of involvement in the Bnei Brak attack was arrested in Yabad. During the operation a soldier who had found an M16 assault rifle in a house was injured by Palestinian gunfire, it added.

The Palestinian presidency condemned the killings in Jenin and warned that an “Israeli escalation would further exacerbate tensions and destabilise the region”.

In a separate incident in the West Bank on Thursday, an Israeli civilian was stabbed and wounded by a Palestinian on a bus in the Gush Etzion settlement bloc, the Israeli military said.

“Another civilian on the bus operated to thwart the attack and neutralised the terrorist,” it added.

Israeli media reported that the injured civilian was a 28-year-old man and that he was in a serious condition in hospital after being stabbed in the upper body with a screwdriver. The Palestinian – identified as Nidal Jumaa Jaafr, 30, from the town of Tarqumiyah – was shot and killed, they said.
Recent weeks have seen high-level talks between Israeli and Palestinian officials about how to bring calm during this sensitive period, when religious holidays will overlap for Muslims, Jews and Christians.

None of them want a repetition of the full-scale conflict between Israel and militants in Gaza during the Islamic holy month of Ramadan last year. However, co-operation has failed to prevent a rush of attacks and the latest clashes.

Israelis feel unsafe: “Now the feeling is that you have to look 10 times to check there’s no-one suspicious behind you,” says Bnei Brak resident Shlomo Dube.

Ordinary Palestinians worry that tensions could easily spiral out of control.

Israel’s government is beefing up security on its streets and in areas bordering the West Bank. Right now, it is still allowing permits for older Palestinians to enter Jerusalem for worship during Ramadan and Easter.

An Israeli minister, Nachman Shai, tells me there must be a balance of security and humanitarian considerations. “

We should use both the carrot and the stick at the same time,” he says. “Hard power and soft power together.”

line
On Wednesday evening, Prime Minister Naftali Bennett said the IDF, the Israel Police and the Shin Bet security agency had “significantly increased their intelligence operations in order to reach, in a timely manner, those who are planning to carry out attacks”.

“We have also reinforced the presence throughout the country of those in uniform and those carrying weapons.”

But he also told Israeli citizens: “Whoever has a licence to carry a weapon, this is the time to carry it.”

“This is neither our first nor our second wave of terrorism. We have experience with struggle. Israeli society, when it is tested, knows how to show composure, remain resilient and rise to the occasion. We cannot be broken,” he added.
He spoke after funerals were held for two of the five people killed in Tuesday’s attack in Bnei Brak, a predominantly ultra-Orthodox Jewish neighbourhood of Tel Aviv.

A Palestinian gunman opened fire at passers-by on several streets, killing two Israeli civilians, as well as two Ukrainian men and an Israeli Arab police officer who confronted him at the scene. The gunman was shot dead by another officer.

Palestinian militant groups welcomed the attack, but it was condemned by President Mahmoud Abbas.

Israel was already on high alert after three Israeli Arabs linked to the Islamic State (IS) group carried out two attacks that left six people dead.

Four people were killed in a car-ramming and stabbing attack in the southern city of Beersheba on 22 March, and two police officers were shot dead in the coastal town of Hadera on Sunday. All three assailants were shot dead.