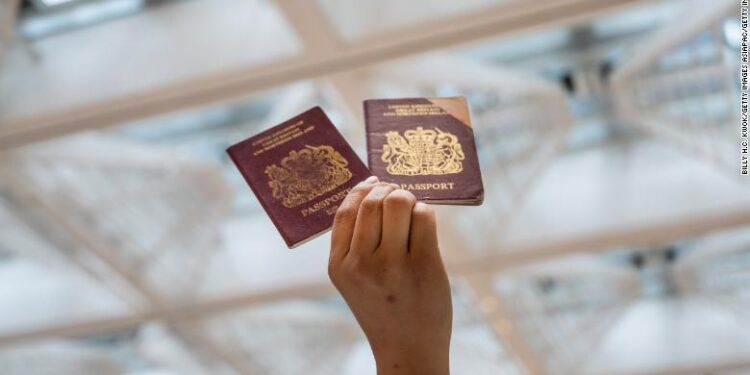 The United Kingdom is preparing to welcome potentially tens of thousands of migrants from Hong Kong, with the opening of a new visa for residents of the former British colony this Sunday.

Last year, China imposed a sweeping national security law on Hong Kong that critics say has stripped the city of its autonomy and precious civil and social freedoms, while cementing Beijing’s authoritarian rule over the territory.

Since then, many prominent activists and politicians have fled, while others have begun quietly arranging to move overseas.

The law criminalizes secession, subversion and collusion with foreign forces, and carries with it a maximum sentence of life imprisonment.

Soon after it was proposed, the UK government announced it would provide a new path to citizenship for holders of British National (Overseas) passports, which were introduced in the final years of British rule over Hong Kong, enabling residents to hold onto a degree of British citizenship, though without any long term right of abode in the UK.

Under the new program, those with BN(O) status and their eligible family members will be able to travel to the UK to live, study and work, becoming eligible for settlement in the UK in five years, and citizenship 12 months after that.

A pro-democracy protester holds a British passport during a rally on June 1, 2020 in Hong Kong.In a statement Friday, British Prime Minister Boris Johnson said by taking this move, “we have honored our profound ties of history and friendship with the people of Hong Kong, and we have stood up for freedom and autonomy — values both the UK and Hong Kong hold dear.”

According to data from the UK Home Office, acquired by CNN through a freedom of information request, since July 2019, when anti-government protests broke out across the city, over 400,000 BN(O) passports have been issued to Hong Kong residents, more than the total number issued for the previous 15 years.

Those numbers may also be lower than the amount of people applying, as the coronavirus pandemic appears to have impacted the processing of passports last summer.

Before the UK announced the new path to citizenship, there were around 350,000 BN(O) passport holders, but the number of people who are eligible — those born before 1997, in British-ruled Hong Kong — could be as high as 3 million.

China has reacted angrily to the proposed plan, claiming it breaches the agreement under which Hong Kong was handed over from British to Chinese rule, which London in turn argues the national security law undermines.In a regular press conference Friday, Chinese Ministry of Foreign Affairs spokesman Zhao Lijian accused the UK of “disregarding the fact that Hong Kong has returned to the motherland for 24 years” and violating promises made at the time of handover.

“It’s not clear what practical effects such a move would have, however, as most Hong Kong residents, whether foreign or Chinese nationals, use locally-issued identification cards for the purposes of entering or exiting the territory, and also for most identification purposes.

Many of those who are eligible for a BN(O) passport will also be entitled to apply for, and may already hold, a Hong Kong passport, which can also be used for these purposes.BN(O) passports have never been fully accepted for travel to mainland China, where ethnic Chinese Hong Kong residents use a “home return” permit along with their Hong Kong identification card or passport.

Given the limited scope of this immediate response, many have suggested further steps could be coming, especially if a large number of people exit Hong Kong in coming months.According to the South China Morning Post, a Hong Kong newspaper, the Beijing government has mulled stripping BN(O) holders in Hong Kong of the right to hold public office and potentially even the right to vote.

Writing earlier this month, Regina Ip, a member of Hong Kong leader Carrie Lam’s cabinet, suggested that as a result of the UK’s move, Beijing could revoke the right of Hong Kongers to hold dual citizenship, something not enjoyed by people on the mainland, and impose Chinese nationality laws fully on the city.”

Thereafter, Hong Kong Chinese who acquire a foreign nationality of their own free will, will be deemed to have lost Chinese nationality, in strict accordance with Article 9 of the Chinese Nationality Law,” Ip said.

“When they make a conscious decision to leave and, by implication, give up on Hong Kong, it is only right that they should be asked to make their choice — China or a foreign country — foreign citizenship or the right of abode and the right to vote in Hong Kong.”

Despite this and other threats, researchers estimate as many as 600,000 Hong Kongers could move to the UK within the first three years of the policy, and potentially far more, as continued crackdowns under the national security law prompt people to leave.Nor might BN(O) holders be the only people leaving.

Around the time of the 1997 handover, many Hong Kongers acquired foreign citizenship, especially in Commonwealth countries such as Canada and Australia, both of which had generous immigration policies at the time.

Pro democracy activists and protesters who do not hold foreign nationality have also begun applying for asylum overseas in greater numbers, particularly in the wake of a crackdown last year on those who took part in the 2019 unrest.

In December 2020, former lawmaker Ted Hui dramatically fled Hong Kong, taking advantage of a fake environmental conference to jump his bail, and has now sought asylum in the UK. Nathan Law, a prominent former lawmaker and leader of the 2014 Umbrella Movement, has also claimed asylum there, while others have sought protection in Germany, the US, and Australia.

Escaping overseas does not always equal complete freedom: Law and other exiles have complained of being tailed and even harassed by people they believe are agents of the Chinese government, a charge Beijing’s representatives have denied.

They are also limited in what communications they can have with family and friends back in Hong Kong, for fear of getting them in trouble with the authorities.

While most BN(O) holders living in the UK are unlikely to be monitored in such a way, the intense political environment around the new scheme may make it difficult to return for those who decide they do not want to stay in Britain.

Ray Wong, an activist who fled to Germany in 2017, becoming among the first Hong Kongers to gain asylum in Europe, told CNN last year that he missed “basically everything in Hong Kong.””I miss being surrounded by Hong Kong people, being surrounded by Cantonese-speaking people,” he said. “I even miss the very unpleasant climate.”