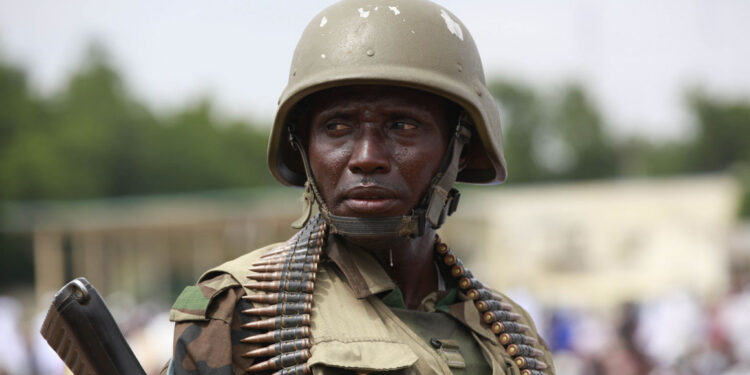 Commercial drivers, motorists, traders and commuters around Oshodi axis in Lagos State, were fraught with panic, yesterday, as dozens of officers in a joint military task force ransacked the community in a suspected vengeance spree.

The operatives, while attacking residents, vandalised vehicles plying the axis and those parked at motor parks around the Oshodi under bridge.

While some of the commercial drivers fled to safety, others, including one Segun, were arrested and taken away in patrol vehicles.

It was gathered that the military personnel stormed the area to avenge the death of a yet-to-be-identified airman.

The airman, who was said to be dressed in mufti, was reportedly on the Oshodi bridge waiting to board a bus when some hoodlums attacked and dispossessed him of his valuables.

The airman’s remains were later found on the bridge on Sunday after his colleagues made frantic efforts to locate his whereabouts.

A commercial driver, who gave his name only as Ade, said scores of innocent residents were whisked away by the military men.

He said, “What we gathered was that a soldier died on the bridge. We don’t know whether he was robbed or knocked down by a vehicle.

“Today, the soldiers arrested one of our drivers, Segun. He was struggling to drive his bus away from the scene of the attack when they caught up with him. I and some other drivers were lucky to speed off, but he was not. They also arrested other people.

“They even attempted to destroy my windscreen, but I escaped. We initially thought that they would come yesterday (Wednesday) and when they didn’t show up, people became relaxed until they struck today.”

A trader, who identified herself simply as Taofikat, said some of the military officers wore masks to conceal their identities, adding that business activities were affected by the unrest.

She said, “They covered their faces and destroyed peoples’ property. Commercial drivers conveying passengers from Alagbado to Oshodi were dropping them off at Bolade to avoid getting to the bridge. Everywhere was tense.”

One Saheed, a member of the National Union of Road Transport Workers, said that to evade arrest and prevent their vehicles from being vandalised, motorists and commercial drivers drove against traffic.

“A lot of commuters were stranded around Capa because commercial drivers were turning back. The soldiers were breaking windscreens and using knives to deflate tyres,” he added.

A resident, who spoke on condition of anonymity said, “What happened was that one of the soldiers was killed on the bridge. The hoodlums dispossessed him of his phone and he tried to regain possession of the phone, but they killed him. They never knew he was a military officer because he was not on uniform.”

A spokesperson for the Nigerian Air Force, Lagos Command, Abigail Ologun, confirmed that an airman was killed in the area.

“I am still gathering information and that is the only thing I can tell you for now,” she added.

The Public Relations Officer, 81 Division, Nigerian Army, Olaniyi Osoba, said, “The situation is currently under control as commuters are already going about their normal businesses without any harassment. Investigation is ongoing to determine what caused the unfortunate incident.”

“We urge Lagosians to go about their lawful business in the area and in the state in general. No cause for alarm,” he added.