US Capitol secured, 4 dead after rioters stormed the halls of Congress to block Biden’s win 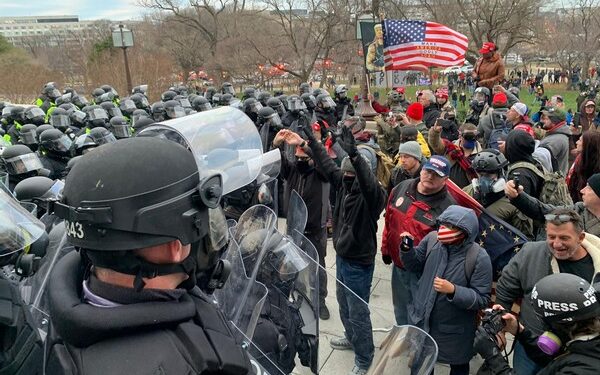 The US Capitol is once again secured but four people are dead — including one woman who was shot — after supporters of President Donald Trump breached one of the most iconic American buildings, engulfing the nation’s capital in chaos after Trump urged his supporters to fight against the ceremonial counting of the electoral votes that will confirm President-elect Joe Biden’s win.

Shortly after 1 p.m. ET Wednesday hundreds of pro-Trump protesters pushed through barriers set up along the perimeter of the Capitol, where they tussled with officers in full riot gear, some calling the officers “traitors” for doing their jobs. About 90 minutes later, police said demonstrators got into the building and the doors to the House and Senate were being locked. Shortly after, the House floor was evacuated by police.

Vice President Mike Pence was also evacuated from the chamber, where he was to perform his role in the counting of electoral votes.

Supporters of President Donald Trump climb the west wall of the the U.S. Capitol on Wednesday, Jan. 6, 2021, in Washington. (AP Photo/Jose Luis Magana)An armed standoff took place at the House front door at about 3 p.m. ET, and police officers had their guns drawn at someone who was trying to breach it.

A Trump supporter was also pictured standing at the Senate dais earlier in the afternoon.

A woman, who is yet to be identified, died after being shot in the chest on the Capitol grounds, DC police confirmed to CNN. More information on the shooting was not immediately available and a police spokesperson said additional details will come later.

“One adult female and two adult males appear to have suffered from separate medical emergencies, which resulted in their deaths.

Any loss of life in the District is tragic and our thoughts are with anyone impacted by their loss,” Contee said at a news conference Wednesday night.Multiple officers have been injured with at least one transported to the hospital, multiple sources tell CNN.

Smoke grenades were used on the Senate side of the Capitol, as police worked to clear the building of rioters.

Windows on the west side of the Senate were broken, and hundreds of officers amassed on the first floor of the building.

The Senate floor was cleared of rioters as of 3:30 p.m. ET, and an officer told CNN that they successfully squeezed them away from the Senate wing of the building and toward the Rotunda.

The protesters were removed through the east and west doors of the Capitol. At least 52 people were arrested as of 9:30 p.m.

The US Capitol Police worked to secure the second floor of the Capitol first, and were seen just before 5 p.m.

An afternoon of chaos

Several loud flash bangs were heard as well.Protesters could be seen pushing against metal fences and police used the fences to push protesters back, while other officers reached over the top to club people trying to cross their lines.

Flash bangs could be heard near the steps of the Capitol as smoke filled the air. In some instances, officers could be seen deploying pepper spray. Tear gas was deployed, but it’s not clear whether by protesters or police, and people wiped tears from their eyes while coughing.

People shelter in the House gallery as protesters try to break into the House Chamber at the U.S. Capitol on Wednesday, Jan. 6, 2021, in Washington.

Lots of House members were seen wearing gas masks as they moved between Capitol buildings.

Members were calling family to say they were OK.