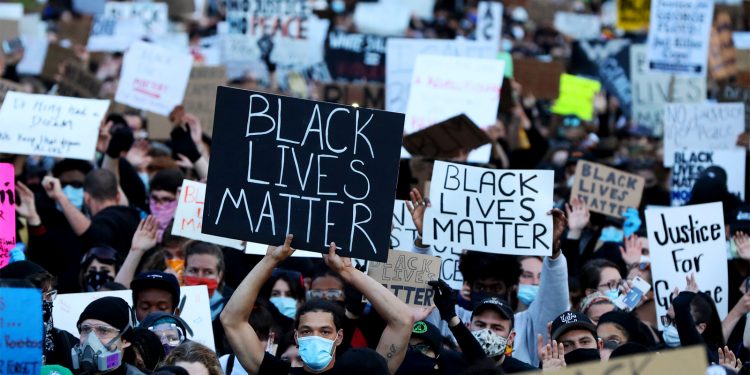 A US couple who were filmed outside their mansion waving guns at social justice protesters last summer have pleaded guilty to misdemeanour charges.

Mark and Patricia McCloskey agreed to give up the guns used in the 28 June confrontation in St Louis, Missouri.

The couple, both lawyers, made national news when footage of them went viral, launching them to a cameo at last year’s Republican National Convention.

Mr McCloskey defended his reaction to what he called an “angry mob”.

“I’d do it again,” he said outside court on Thursday, US media report. “Any time the mob approaches me, I’ll do what I can to put them in imminent threat of physical injury because that’s what kept them from destroying my house and my family.”

Because the charges are misdemeanours, the personal injury lawyers can keep their law licences and continue to own firearms.

Judge David Mason accepted their guilty pleas, but rejected their request to donate Mr McCloskey’s rifle in a fundraiser, US media said.

A grand jury had indicted the couple on felony charges, which would have sent them to jail if convicted. But special prosecutor Richard Callahan said in a statement he opted for misdemeanour charges for a series of factors including “the age and lack of a criminal record for the McCloskeys, the fact they initially called the police, and the fact that no-one was hurt and no shots were fired”.

Mr Callahan described the demonstrators as a “racially mixed and peaceful group, including women and children”, who had made a wrong turn on the way to their protest. There was no evidence the group was armed, he said.

Participants had marched past the couple’s $1.15m mansion on their way to the home of then-St Louis Mayor Lyda Krewson.

The protest came weeks after George Floyd’s death while in police custody in Minneapolis, Minnesota. His murder incited a wave of demonstrations worldwide, with participants demanding racial equality and an end to police brutality.

The McCloskeys have since branded themselves as conservative defenders against left-wing rioters.

In May, Mr McCloskey announced he would run as a Republican in a bid for a US Senate seat in Missouri.

Coronavirus in Europe: Infections surge in France, Germany and Spain