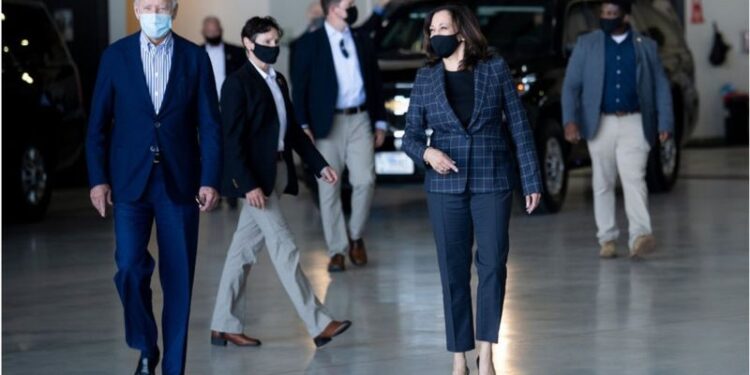 Neither aide had close contact with the candidates in the 48 hours prior to their positive tests, she added.

Ms Harris had been scheduled to fly to North Carolina on Thursday.

Biden Campaign Manager Jen O’Malley Dillon said the senator had no close contact with either infected staff member in the two days before the positive test, and was therefore not required to quarantine.

“Regardless, out of an abundance of caution and in line with our campaign’s commitment to the highest levels of precaution, we are cancelling Senator Harris’s travel through Sunday,” she said.

Mr Biden was not in close contact with the individual, his team said, and doctors advised that he did not need to self-isolate.

On 8 October, Ms Harris and Mr Biden campaigned together in Arizona, where they held multiple appearances and interviews. The campaign says Ms Harris flew with both staff members on that trip, but they all wore masks throughout the flight and practiced social distancing.

Ms Harris and her husband both tested negative on Thursday, the campaign told reporters.

The Biden campaign has made emphasising health safety a visible part of its political strategy, in an effort to mark a point of contrast with President Trump. A number of Republicans and White House associates – and Mr Trump himself – have tested positive for coronavirus in recent weeks.

Mr Biden is scheduled to hold a town hall event on ABC News on Thursday night. President Trump is due to host a competing town hall on NBC at the same time.

Ms Harris had been due to visit North Carolina on the state’s first day of early in person voting. She was scheduled to visit the cities of Charlotte and Asheville for what would have been her second trip to the crucial swing state in the past three weeks.

Mr Trump, who held an afternoon airport rally in the North Carolina city of Greenville, is holding his sixth visit to the state since the Republican convention in late August.

“Two of the people that travel with her, in the plane all the time. They have tested positive,” Mr Trump said on Thursday. “We extend our best wishes, which is more than they did for me,” he told the audience.

Both Mr Biden and Ms Harris publicly wished the president and the first lady a quick recovery after the news of their positive Covid test was announced.

The president’s visit was expected to draw thousands of people, local police say. Parking restrictions mean that attendees were required to take a Trump campaign shuttle bus from a nearby fairgrounds.

Local health officials had appealed to Trump supporters to wear masks and practice social distancing and hand washing at the rally.

But like at previous Trump rallies, pictures from Greenville showed many of his supporters eschewing masks and crowding close together.