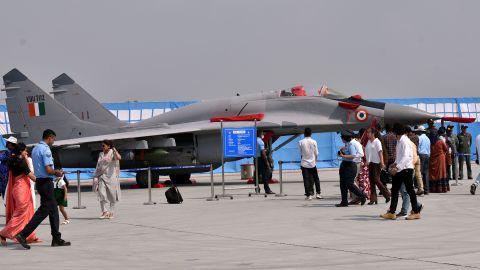 The United States is in “deep” talks with India over its reliance on Russian arms and energy, a US State Department official said Tuesday, in a development that could further isolate Moscow on the international stage.

Russia “is no longer a reliable weapons supplier” and Indian representatives are “coming to understand that there could be real benefits for them (in finding other markets),” the official told reporters in New York.
“India is heavily, heavily dependent on Russia, and that’s something that they did to themselves over some 40 years: first their military and then their energy dependence,” the official said. “So we have been in deep conversation with India about the fact that we want to help them have options to diversify here.”

CNN has contacted India’s Ministry of External Affairs, but did not receive a response.

The State Department official’s comments came hours before Russian President Vladimir Putin announced an escalation of Moscow’s offensive in Ukraine, calling for the immediate “partial mobilization” of Russian citizens.
“In order to protect our homeland, its sovereignty and territorial integrity, to ensure the security of our people and people in the liberated territories, I consider it necessary to support the proposal of the Ministry of Defense and the General Staff to conduct partial mobilization in the Russian Federation,” Putin said in a highly anticipated speech to the nation Wednesday.
Efforts to begin partial mobilization will begin on Wednesday and the decree was already signed, Putin said. The mobilization would mean citizens who are in the reserve and those with military experience would be subject to conscription, he added.

Putin framed the fighting as part of a larger struggle for Russian survival against a West whose goal is it is to “weaken, divide and ultimately destroy our country.”
It is unclear what impact Putin’s comments will have on India’s position on the war.
Since the start of Russia’s unprovoked invasion of Ukraine, India has sought to carve a middle path between Moscow and its Western critics, largely steering clear of condemning a country that remains its biggest arms supplier and with which it has ties dating back to the Cold War.

It has so far largely resisted Western pressure to cut its economic ties with the Kremlin, instead increasing its purchases of Russian oil, coal and fertilizer, and has repeatedly abstained from a United Nations vote on suspending Russia from the Human Rights Council, instead calling for “dialogue and diplomacy.”
However, Indian Prime Minister Narendra Modi appeared to indicate a potential change in tone last week, telling Russian President Vladimir Putin that now is not the time for war.

The comments from Modi came during a face-to-face meeting on the sidelines of the the Shanghai Cooperation Organization summit in Uzbekistan.
“I know that today’s era is not of war and we have talked to you many times over the phone on the subject that democracy and diplomacy and dialogue are all these things that touch the world,” Modi told Putin.

While India’s relationship with Russia goes back decades, New Delhi’s ties with the West have been growing ever closer since Modi’s election in 2014. Annual India-US trade is more than $110 billion, compared to about $8 billion for India’s trade with Russia. In recent years, India has also become a major customer for US military equipment.

India is also a member of the Quadrilateral Security Dialogue alongside the US, Japan and Australia.
Modi’s apparent criticism of Russia is the latest setback for Putin, whose forces have suffered a series of major defeats on the battlefield in recent weeks. Ukraine claims to have recaptured some 8,000 square kilometers (3,000 square miles) of territory.
On Tuesday, the State Department official suggested that atrocities such as the mass burial site uncovered in the city of Izyum were driving countries away from tacitly supporting Russia.

“I think the horrendous behavior of Russian forces, the atrocities that we’re seeing, the fact that in Izyum, again, some 500 bodies in a mass grave, women, children, soldiers shot in the head, is again horrifying the world and people don’t want to be too close,” the official said.