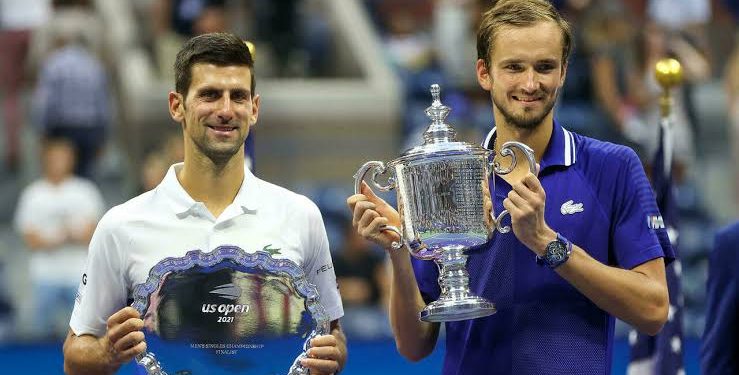 Medvedev also becomes the first man since Rafael Nadal in 2010 and second since Ivan Lendl in 1987 to drop only one set en route to a US Open men’s singles title.

Daniil Medvedev of Russia celebrates with the championship trophy after defeating Novak Djokovic to win the Men’s Singles final match on Day Fourteen of the 2021 US Open.

He thanked friends, family and fans for giving him energy throughout the week. He ended his speech by wishing his wife a happy anniversary.

“For me, you are the greatest tennis player in the history,” he said.

“I wish you many more grand slams, many more majors, I’m sure you’ll be on this stage in the future again,” he said.

Djokovic had been looking to win a record 21st grand slam title and complete the first men’s calendar grand slam — winning the Australian Open, French Open, Wimbledon and US Open in the same year — since Rod Laver in 1969.

Medvedev, who defeated 12th seed Felix Auger-Aliassime of Canada in straight sets to reach the final, was appearing in his third career grand slam final, having lost the previous two.

The 25-year-old lost to Rafael Nadal in five sets in the 2019 US Open final and fell in the Australian Open final to Djokovic in straight sets earlier this year.

However, Medvedev looked ominous throughout this year’s competition, dropping just one set on the way to the final where he was able to get revenge for his Melbourne loss and scupper Djokovic’s hopes of a year for the ages.

After his semifinal win against Auger-Aliassime, Medvedev said he learned a lot from the lost final against Djokovic in Melbourne.

“He was playing different than the matches he did before me, and I was kind of not ready for it, so now I am,” Medvedev said of Djokovic’s tactics.

A moment of growth

For Medvedev, his 2019 US Open experience was a time of ups and downs.

During a match, he was fined for unsportsmanlike conduct and a visible obscenity. As a result, he became a defacto villain in the eyes of the New York crowd. However, because of his personality, charisma and excellent play, he won them back over the following rounds.

Before this year’s US Open, he hoped it would be a “love” relationship between him and the fans. And since the experience in 2019, he has learned to just be himself.

“Of course, I take lessons,” he explained to CNN Sport before the tournament this year. “What you should do and what you shouldn’t do on the tennis court. But as a tennis player, I’m definitely different.

“It was a new experience that made me believe in myself even more and made me better as a tennis player.”

In a promising outcrop of young, up-and-coming stars in men’s tennis, Medvedev might be at the forefront.

Although he’s fallen at the last hurdle in grand slam finals, a victory at the ATP Tour Finals in 2020 was a breakthrough moment for the Russian.

He showed his pedigree on the way to the title, becoming the first player to defeat the world No. 1, No. 2 and No. 3 on his way to winning the ATP Finals.

But with Stefanos Tsitsipas and Tokyo 2020 Olympic champion Alexander Zverev both making names for themselves on the tennis scene, is Medvedev — with a grand slam title to his name — the head of the pack?

He revealed after his ATP Final victory he didn’t get much sleep.

“I didn’t sleep so much. There were a lot of things going on. I did reply to most of my messages, all of them on WhatsApp and most of them on other social media [platforms], which takes some time after a big win like this,” Medvedev said.

“I even managed to play a little bit of Formula 1 here in the hotel. It was a busy night. I celebrated with my coach after the match [and] did all the media things. I got a good two hours of sleep.”