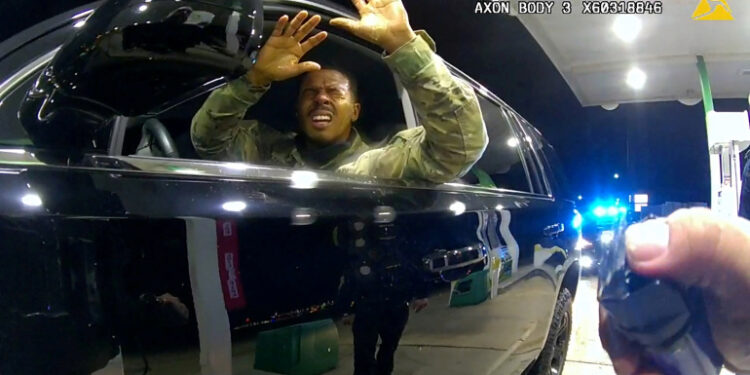 US Army 2nd Lieutenant Caron Nazario reacts as he holds up his hands after being sprayed with a chemical agent by Windsor police officer Joe Gutierrez. [Handout/Windsor Police/Handout via Reuters]

Joe Gutierrez in Virginia was terminated from his job over what court papers say was a violent traffic stop of US Army officer.

One of two Virginia police officers accused of assaulting a US Army Lieutenant Caron Nazario by pointing their guns and pepper-spraying him during a traffic stop has been fired, according to an official statement.

Officer Joe Gutierrez was terminated from his employment after an investigation determined he did not follow policies set by the police department, the town of Windsor, Virginia, said in a statement on Sunday.

The statement did not detail any punishments for the other officer involved in the incident, Daniel Crocker.

It added that disciplinary action and department-wide requirements for additional training were implemented after the incident.

The firing comes after Nazario filed a lawsuit against the two police officers in federal court over what court papers say was a violent traffic stop on December 5, 2020, where officers pointed their guns, knocked him to the ground, pepper-sprayed him and “threatened to murder him”.

Nazario, who is Latino and Black, alleged Gutierrez and Crocker violated his constitutional rights, with his lawsuit including assault, illegal search and illegal detention.

Earlier on Sunday, Virginia Governor Ralph Northam said he was directing the Virginia State Police to conduct an independent investigation into the case.

The town of Windsor joined the governor in calling for an investigation of the incident by the Virginia police and a full review of the actions of the two police officers.

The two sides in the case had disputed what happened during the incident. At the time, Nazario was coming from his duty station and going home, lawyer Jonathan Arthur told The Associated Press on Friday.

“Graduated from Virginia State University; he was commissioned out of their ROTC program. He’s an officer in the United States Armed Forces,” Arthur said. “These guys decide to do this to him.”

Crocker radioed he was attempting to stop a vehicle with no rear license plate and tinted windows. He said the driver was “eluding police” and he considered it a “high-risk traffic stop”, according to a report he submitted afterwards, which was included in the court filing.

Arthur said Nazario explained at the time that he wasn’t trying to elude the officer, but was trying to stop in a well-lit area “for officer safety and out of respect for the officers”.

Gutierrez was driving by when he heard Crocker’s call, saw him attempting to stop the SUV and decided to join the traffic stop. Gutierrez acknowledged that Nazario’s decision to drive to a lighted area happens to him “a lot, and 80 percent of the time, it’s a minority”, Arthur said, quoting the officer.

The lawsuit says by the time the two officers reached Nazario’s SUV, the license plate was visible in the rear.

Nazario drove his SUV to a well-lit gas station where, according to the lawsuit, the two officers got out and immediately drew their guns and pointed them at Nazario after they got out of their cars.

The officers then attempted to pull Nazario out of the vehicle while he continued to keep his hands in the air. Gutierrez then stepped back and pepper-sprayed Nazario multiple times as officers yelled for him to get out of the car.