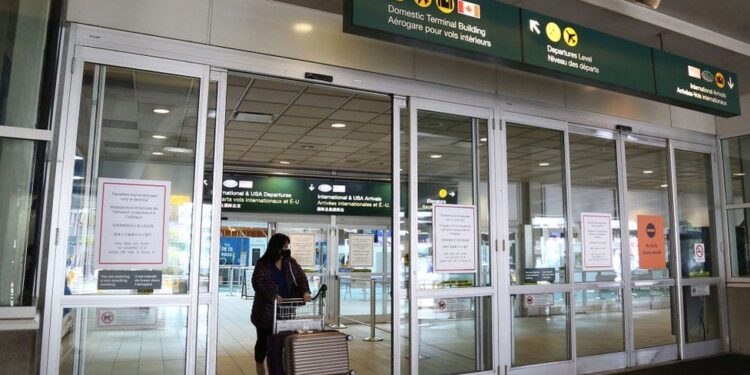 A 28-year-old man has been shot dead at Vancouver international airport in Canada, in what police believe is gang-related violence.

The alleged killer escaped in a car with others, shooting at police as they went.

Photos from the scene show a bullet hole in the windscreen of a police car and another window shot out.

Police say that they are looking for one or more suspects. The airport has now reopened after closing temporarily.

The shooting happened outside the departures terminal at about 15:00 (20:00 GMT) on Sunday. Panicked travellers ran for cover, the Vancouver Sun reports.

Police caught up with the getaway vehicle, an SUV, but the police car was shot at by the escaping suspects in a busy street.

The pursuing officer did not return fire and stopped the pursuit, police said.

A vehicle believed to be the car used in the shooting was found in flames about 28km (17 miles) away from the airport a short time later.

The victim was known to police and the incident was related to a spate of recent gang violence, police said.

The murder “was targeted and carried out in broad daylight, with absolutely no regard for public safety”, Richmond Chief Supt Will Ng said.

“This generation of gangsters is taking things to another level,” he added. “They will stop at nothing to target rivals, even if it’s an international airport in broad daylight on Mother’s Day and putting everyone at risk, including shooting at a police officer.”

“My thoughts are with the communities in the lower mainland who have been impacted by gun and gang violence far too often,” he said on Twitter.