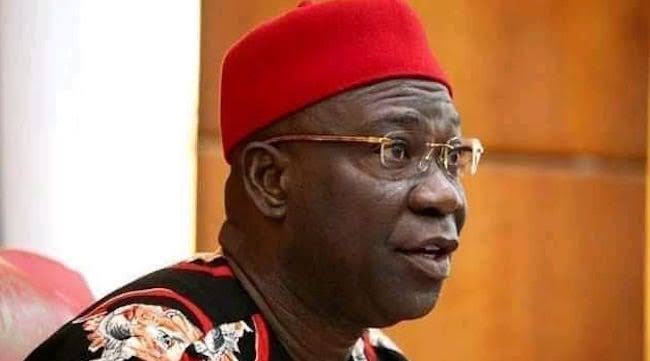 The Economic and Financial Crimes Commission (EFCC) has replied the embattled former Deputy Senate President, Ike Ekweremadu, on the claim that the Commission is behind his bail refusal by the United Kingdom authorities.

Ekweremadu had earlier told Justice Inyang Ekwo of a Federal High Court in Abuja that EFCC was responsible for his travails at the London Court where he had been in detention over alleged organ harvest.

The senator’s allegations were contained in an application he filed before the federal high court seeking an order of the court to set aside interim order granted in favour of the Federal Government for the forfeiture of his 40 properties in and outside the country.

However, in its counter affidavit, the EFCC argued that the allegations made against it by Ekweremadu’s son showed he was not conversant with the proceedings in the criminal prosecution against his parents in the London court, which was why he thought the EFCC “has a hand in the predicament and travails of his parents.”

The EFCC, while not denying communicating with the UK authorities, said its July 18 2022 letter to the Crown Prosecution Service, UK, was in response to the Crown Prosecution’s letter of July 17, 2022 “was a mere routine to a counterpart government agency in accordance with the global best practice of information sharing with other law enforcement and other agencies in the USA and UK.”

“The response of the respondent to the Crown Prosecution Service was never an instigation or encouragement to the Crown Prosecution Service to detain Senator Ike Ekweremadu or anyone else, as the respondent was neither linked to nor had any interest in the subject of investigation in the U.K., namely trafficking a person with a view to exploitation, that is, organ harvesting.

“Both the Metropolitan Police and Crown Prosecution Service in the U.K. are independent agencies with wide discretion to carry out their duties/responsibilities and cannot be influenced by anyone, including the respondent.

“As such, the innuendoes, insinuations speculations and presumptions manifest in the aforementioned paragraphs of Lloyd Ekweremadu’s affidavit are unfounded and unkind to the respondent,” it said.

The EFCC, which claimed to have been investigating Ekweremadu for money laundering before now, argued that no law requires it to initiate forfeiture proceedings or criminal charges against a suspect within a particular number of years or a time frame.

It added that “the filing of the instant forfeiture proceedings was a mere coincidence with the arrest of Senator Ike Ekweremadu and his wife, Beatrice N. Ekweremadu in the UK.”

Lawyer to the EFCC, Sylvanus Tahir, SAN argued otherwise and prayed the court to reject the motion since the case was not directed at Ekweremadu, but at the property, to which some individuals and organisations were already laying claim.

Meanwhile, Justice Inyang Ekwo has adjourned till January 25 next year for the ruling.