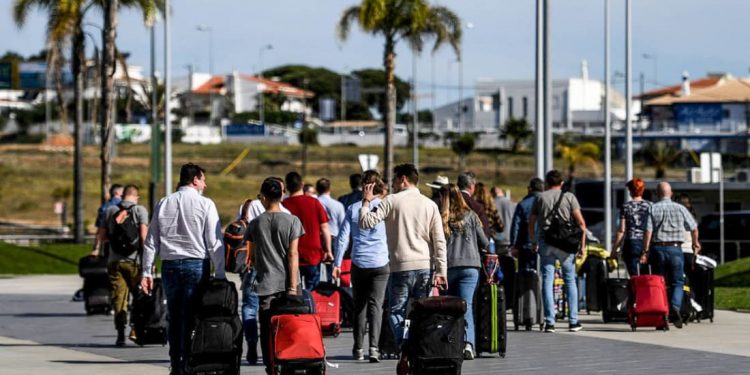 Going on holiday is no longer illegal for travelers from the United Kingdom.

While the move has been met with relief from those eager to take a foreign holiday, many have been left confused by the new travel regulations, along with the risk-based “traffic light” system that’s now in place.

Here’s everything you need to know about the UK travel rules.

Can UK residents now travel abroad for a holiday?

Residents of England, Scotland and Wales have been allowed to go on vacation since May 17, when the restrictions that made it illegal to travel abroad for non-essential reasons ended.

The rules were relaxed for residents of Northern Ireland on May 24.

However, government officials have warned that the experience will be very different due to ongoing concerns around Covid-19.”This is a new way of doing things, and people should expect travel to be different this summer — with longer checks at the borders, as part of tough measures to prevent new strains of the virus entering the country and putting our fantastic vaccine rollout at risk,” UK Transport Secretary Grant Shapps said in a statement last month.

Prime Minister Boris Johnson recently announced that the current UK rules around social distancing, which were due to be lifted on June 21, will remain in place for at least another four weeks due to concerns about the Delta variant. This move suggests that there may not be any major changes to restrictions around international travel to and from the UK in the next month or so.

The UK’s traffic light system for designating safe travel destinations, lists countries or territories it classifies as “green” — meaning anyone traveling there will not have to quarantine on return.

Portugal was originally on the green list, but it moved to amber on June 8.

It’s worth noting that entry to Australia, New Zealand, Singapore, Brunei and the Faroe Islands is heavily restricted, so a destination’s appearance on the list doesn’t automatically mean that UK travelers can go there.

Which countries can I visit if I live in England?

English travelers are permitted toa small number of “green” destinationswithout having to quarantine on their return, provided they take a pre-departure test, as well as a PCR test on or before day two of their arrival back in the UK.

That said, some countries currently listed as green, such as New Zealand and Australia, remain closed to international travelers.

While travelers are also allowed to visit countries designated “amber” or “red,” the restrictions are much stricter, making them far less attractive options.

Those who choose to visit places on the “amber” list, which include Portugal, France, Greece, Spain and Italy, will have to quarantine for 10 days when they return, take a pre-departure test and also get a PCR test on day two and eight of their isolation.

However, “amber” destinations qualify for a test-to-release scheme, which means holidaymakers can take a PCR test after five days’ quarantine. If they receive a negative result, they will be permitted to go out into the community.

Travelers from England who choose to visit “red” list destinations are required to check in to one of the UK’s quarantine hotels, at a cost of £1,750 (around $2,445) per adult when they return. They must also follow the same testing regulations as those arriving from “amber” destinations.

Which countries can I visit if I live in Scotland, Wales and Northern Ireland?

Scotland and Wales’ May 17 “green lists” were initially the same as England’s and an identical list was issued for Northern Ireland when foreign travel resumed on May 24.However, the destinations may change according to each countries’ needs.

How is the UK deciding which countries go on its lists?

The UK government has said the decision-making is based on factors including a country’s Covid-19 transmission risk, its variant of concern transmission risk and its genomic surveillance capability.The UK’s Joint Biosecurity Centre has undertaken risk assessments for each destination, using data including total number of vaccination doses administered per 100 people. You can read more about the data used here, and about the methodology here.

Should I book a summer holiday in a country on the amber list?

The amber list contains some of the UK’s most-loved tourist destinations, such as Portugal, Italy, Greece, Spain and France.The government guidance is that UK residents should not be booking holidays to “amber list” countries, or planning any nonessential travel, but it is no longer illegal to do so.The amber list is subject to change, which means countries may move to green or red at any time.

Can I go on holiday in the UK?

Travelers from England, Scotland, Wales and Northern Ireland are allowed to go anywhere within those countries and overnight stays are permitted at hotels, B&Bs and hostels, though rules around group numbers vary in each destination.Those who plan to visit any of the Scottish islands are advised to take two lateral flow tests before their trip.

Will I have to quarantine when I come home?

Quarantine rules depend on whether the country you’re traveling to/from is on the “green,” “red” or “amber list.”If you are arriving into the country from a “red” list country, you will have to quarantine in a designated hotel upon arrival for 10 days at your own expense. Bookings must be made through this online portal.

The charge for a single adult is £1,750.There are designated quarantine hotels in England and Scotland. If your final destination is in Wales or Northern Ireland, you will need to book a hotel in England or Scotland.

If you are arriving from an “amber” list country, you will have to quarantine at home for 10 days. The other people in your household do not need to quarantine with you, unless they were also on your trip, or they have Covid symptoms, or they test positive.

If you are arriving from a “green list” destination, quarantine is not a requirement.

The quarantine requirements work in tandem with testing. It’s compulsory to take a Covid test on or before day two of your quarantine, and on or after day eight.

If you’re arriving from a “red” or “amber” destination, your passenger locator form must contain details of your quarantine destination.You can get public transport to your place where you intend to quarantine, but the official guidance is to only do so “if you have no other option.” For the full rules, see here.

During your quarantine, you will be contacted by NHS Test and Trace.

When will the rules change?

The UK government has said the “red”, “amber” and “green” list will be “continuously monitored” and updated every three weeks, so it’s worth keeping tabs on a destination before you depart. There’s no guarantee that a “green” country will stay that way.As for the system more generally — the guidance says travel restrictions will be formally reviewed on June 28, no later than July 31 and October 1, 2021.

Will I need to be vaccinated to travel?

Some countries, such as Iceland, are now open to international travelers who can present proof of vaccination.

In the absence of this, sometimes a recent negative Covid-19 test, or proof of recovery from Covid-19 will also suffice.

The rules frequently change from country to country and it is advisable to check destination-specific requirements before booking travel and closer to departure.

Will I need a Covid test to travel?

Yes. Travelers heading to approved destinations will need to take a pre-departure test, as well as a PCR test on or before day two of their arrival back in the UK.A test may be needed by the country you’re traveling to. Most destinations that are open to arrivals now require a recent negative PCR test before visitors can enter.Of the countries on the UK “green” list that are currently welcoming tourists or are feasible to reach from the UK, all require a negative PCR test. Some also require visitors to quarantine.Portugal, currently on the “amber” list, will now accept lateral flow tests for those arriving from the UK, along with EU and Schengen countries.

When can UK citizens fly to the United States?

The US is currently on the UK’s “amber” list. As explained above, the UK does not advise nonessential travel to “amber” countries.

Plus, UK residents have been banned from entering the United States since March 2020 and this ban is still in place.

When the initial “green list” destinations were announced, the World Travel & Tourism Council expressed disappointment that the US was not included and accused the UK government of being “too cautious.”Airlines have also been clamoring for the reintroduction of the transatlantic travel corridor, one of the world’s busiest air routes during pre-pandemic times.

It’s unknown when the United States might make it onto the “green list” but it’ll likely coincide with a lifting of US restrictions on UK travelers.

When will all restrictions be lifted?

The UK has been gradually lifting its Covid-19 restrictions in tandem with its vaccine rollout. Restarting international travel on May 17 is part of Step 3 of England’s lockdown easing, which also includes reopening indoor venues like museums and holiday accommodation including hotels.

England’s Covid-19 roadmap initially pinpointed June 21, 2021 as the date in which all Covid-19 restrictions could be lifted.

Scotland, Wales and Northern Ireland have not bookmarked a specific date for the ending of their respective restrictions.

The June 21 date has always been TBC, and the UK government has been keen to emphasize that it’s not set in stone. There are currently concerns about a new Covid-19 variant originating from India, now circulating in the UK.

It’s unknown when the traffic light system will be lifted, but official guidance says travel restrictions will be reviewed on June 28, and again no later than July 31 and October 1, 2021.

Plus, it’s a two-way thing — even if restrictions were to end in the UK, other countries may maintain limitations on UK visitors.