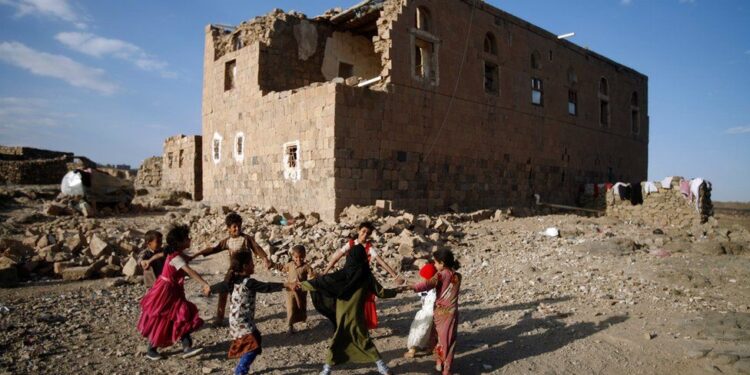 The US is to end its support for offensive operations by its allies in Yemen, which has been devastated by a six-year war in which more than 110,000 people are believed to have died.

Under Mr Biden’s two predecessors, the US backed a coalition led by Saudi Arabia against Houthi rebels in Yemen.

Fighting began in 2014 between a weak Yemeni government and the Houthi rebel movement. It escalated a year later when Saudi Arabia and eight other Arab states – backed by the US, the UK and France – began airstrikes against the Houthis.

Mr Biden announced other changes to US foreign policy, such as a significant increase in the number of refugees accepted by the US, and a reversal of the decision to withdraw American troops from Germany, where they have been stationed since the end of World War Two.

His speech marks a sharp break with the policies of former president Donald Trump, who left office last month.

What does the Yemen announcement mean?

The US has been backing the Yemeni government and its Saudi-led allies in their war against the Houthis. As a result of Thursday’s announcement, the US will stop supporting offensive operations, including the sale of precision-guided munitions to Saudi Arabia and the United Arab Emirates (UAE).

This will not affect operations against al-Qaeda in the Arabian Peninsula.

The Biden administration had already put a temporary halt on arms sales to Saudi Arabia and the UAE.

Mr Biden is expected to name his new Yemen envoy as Tim Lenderking, an experienced diplomat and Middle East specialist.

These announcements confirm President Biden’s pledge to end Yemen’s destructive war. Halting US support to the Saudi-led coalition’s offensive operations won’t close this bloody chapter, but it sends a strong signal to leaders in Riyadh and Abu Dhabi – they’ve also been trying to find ways to extricate themselves from this quagmire.

Achieving peace among Yemen’s bitter enemies will be a monumental challenge. Tim Lenderking is set to be the first US envoy for Yemen since this war was unleashed nearly six years ago. He’s worked on this file for years and is known to everyone who matters.

Western diplomats, as well as Yemenis, have welcomed this new US engagement. In 2015, President Obama gave a green light to the Saudi-led campaign, partly to ease the Kingdom’s anger over the Iran nuclear deal. Now new US envoys on Yemen, and Iran, are tasked with ending this war, and the regional rivalries which still fuel it.

What else did Biden say?

The withdrawal of US troops from Germany will be frozen and forces will remain at their current level of about 36,000. Under Mr Trump, the US was going to reduce its presence by 12,000, with about 5,600 to be deployed elsewhere in Europe.

He also promised to engage diplomatically with Russia but to be tougher on Moscow than Mr Trump, saying the US would not “roll over”.