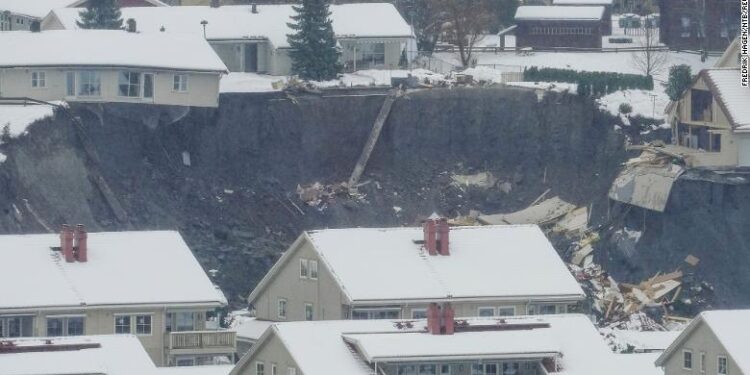 General view after a landslide hit a residential area in Ask village, about 40km north of Oslo, Norway December 30, 2020. Fredrik Hagen/NTB/via REUTERS ATTENTION EDITORS - THIS IMAGE WAS PROVIDED BY A THIRD PARTY. NORWAY OUT.

Ten people were injured, one of them critically, and 11 were classified as missing after a landslide in southern Norway swept away more than a dozen buildings in the early hours of Wednesday, police said.

The landslide struck a residential area in the municipality of Gjerdrum, about 30 kilometers (19 miles) north of the capital Oslo. Police said more than 900 people had been evacuated from the area.

Rescue workers continued to search the area for children and adults who were feared to have been caught in mud and debris, police said.”We are quite certain that there are people in the affected area, but we don’t know if all 11 are there or if the number is smaller,” police spokesman Roger Pettersen told a news conference.

“We’re still searching for survivors,” he said.Photos of the site showed a large crater with destroyed buildings at the bottom of it. Other buildings hung on the edges of the crater, TV footage showed.

Two more houses collapsed into the crater on Wednesday afternoon, broadcaster NRK reported.Norway’s King Harald said the landslide had made a deep impression on him.”My thoughts are with all those who are affected, injured or have lost their homes and those who now live in fear and uncertainty of the full extent of the catastrophe,” the 83-year-old monarch said in a statement released by the royal palace.

Helicopters continued to hover over the area as night fell, at times lowering emergency responders towards the debris of collapsed houses.”There could be people trapped… but at the same time we can’t be sure because it is the New Year’s holiday, which means people could be elsewhere,” Prime Minister Erna Solberg told reporters after visiting the site. 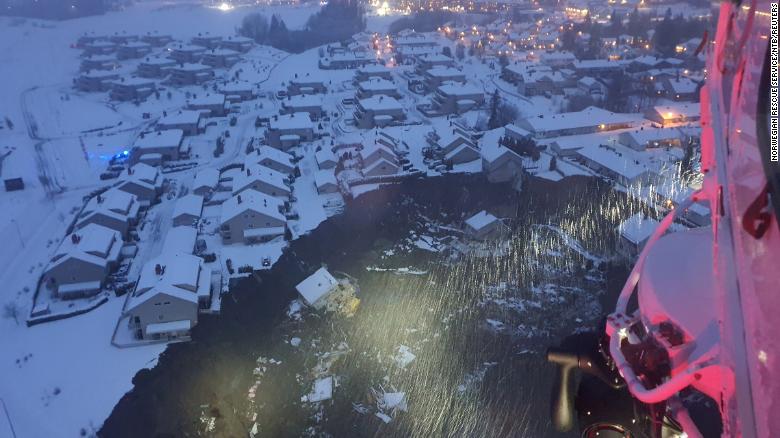 A rescue helicopter view shows the aftermath of the incident.

Local residents spoke of their experience.”There were two massive tremors that lasted for a long while and I assumed it was snow being cleared or something like that,”

Oeystein Gjerdrum, 68, told NRK.”Then the power suddenly went out, and a neighbour came to the door and said we needed to evacuate, so I woke up my three grandchildren and told them to get dressed quickly.”Masses of earth are still moving in what has been one of the largest clay slides in recent Norwegian history, Toril Hofshagen, the regional head of the Norwegian Water Resources and Energy Directorate, told a news conference.