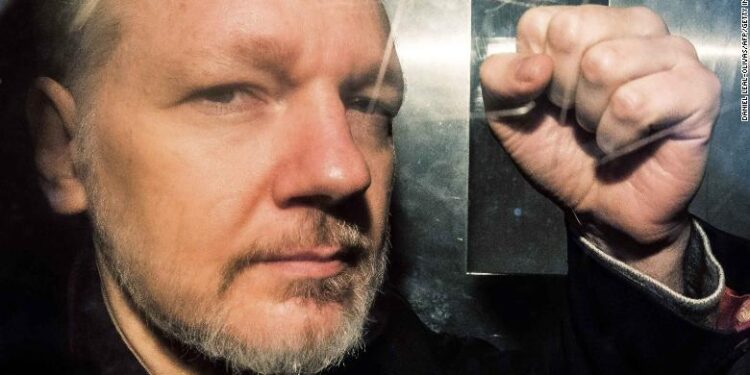 Assange gestures from the window of a prison van on May 1, 2019.

A British judge has rejected a US request to extradite WikiLeaks founder Julian Assange to America, ruling that such a move would be “oppressive” by reason of his mental health.

The 49-year-old Australian has been charged in the US under the Espionage Act for his role in publishing classified military and diplomatic cables.

“I have decided that extradition would be oppressive and I order his discharge,” judge Vanessa Baraitser said in her ruling Monday.

Despite ruling that Assange would be afforded a “fair trial” in the event of extradition to the United States, the judge considered that the “special administrative measures” Assange would most likely be held in would have a severe, negative impact on his mental health.

Baraitser said Assange had “remained either severely or moderately clinically depressed,” throughout his stay at London’s Belmarsh prison and that he was now considered a suicide risk.

She also said that the increased isolation he would face in detention in the US would further increase that risk, adding that Assange had the intellect to circumvent anti-suicidal measures that would be put in place.

In her full ruling, published online, Baraitser wrote: “I accept that oppression as a bar to extradition requires a high threshold … However, I am satisfied that, in these harsh conditions, Mr. Assange’s mental health would deteriorate causing him to commit suicide with the ‘single minded determination’ of his autism spectrum disorder.”

“I find that the mental condition of Mr. Assange is such that it would be oppressive to extradite him to the United States of America,” she added.

A court sketch of Julian Assange at the Old Bailey in London for the ruling in his extradition case on Monday, January 4, 2021.

A tightly-packed crowd of supporters celebrated the news outside the Old Bailey in London on Monday, shouting: “Free, free, free, Assange!

“The US said it would appeal against the decision and asked for the WikiLeaks founder to be remanded in custody while that process was ongoing.”

While we are extremely disappointed in the court’s ultimate decision, we are gratified that the United States prevailed on every point of law raised,” Marc Raimondi, acting director of Public Affairs for the US Department of Justice said in a statement. “In particular, the court rejected all of Mr. Assange’s arguments regarding political motivation, political offense, fair trial, and freedom of speech.”

Raimondi added that the department would “continue to seek” Assange’s extradition.

Nick Vamos, a lawyer and former head of extradition at the UK’s Crown Prosecution Service, told CNN that the US government has 10 days to make a formal application to the UK High Court, where all extradition appeals are heard. While there is no automatic right of appeal, Vamos expects that the appeal will be granted, and is likely to be heard in the next two to three months.

Vamos explained that because the US government is appealing, Assange’s legal team will have the opportunity to cross-appeal on the arguments they lost, while the US government will have the opportunity to “provide additional evidence or assurances to the High Court to address the judge’s findings about the likelihood that Assange will commit suicide.”

“For example, it [the US government] could agree not to detain him in a particular prison or under certain conditions, or to beef up his health care or suicide monitoring,” Vamos said.

Julian Assange’s supporters celebrate outside the Old Bailey court in central London after a judge ruled on Monday that Assange should not be extradited to the United States.

On Wednesday, the judge will consider a bail application from Assange’s legal team.

In order for that application to be considered, Assange will have to point to a change in circumstances, such as the Covid-19 risk, rather than the extradition judgment, Vamos said, adding that he expects that the bail application will fail.

Assange’s lawyers and supporters have long argued that the extradition order against him is politically motivated, and that, if carried out, it would have a chilling effect on press freedoms in both the US and the UK.

Speaking outside court on Monday, Kristinn Hrafnsson, WikiLeaks editor-in-chief, said he was concerned that the decision would be appealed and called on US President Donald Trump to “end this now.”

“The fight is not over, it would not be over until Julian goes home,” Hrafnsson said.Rebecca Vincent, director of international campaigns for Reporters Without Borders (RSF), said the group welcomed the judge’s decision that Assange would not be extradited because of his serious mental health issues, but that they were very concerned about the “substance of the decision.”

“We continue to believe that Mr. Assange has been targeted for his contributions to journalism and until the underlying issues here are addressed other journalists, sources and publishers remain at risk,” Vincent said.

In April 2019, the US charged Assange with “conspiracy to commit computer intrusion,” a charge that carries a maximum sentence of five years. In May 2019, the federal government charged Assange with a further 17 counts under the Espionage Act for his role in publishing classified military and diplomatic cables.

Each of those counts carries a potential sentence of 10 years, meaning that if convicted, Assange could be sentenced to up to 175 years in jail.

Julian Assange gestures from a police vehicle on his arrival at Westminster Magistrates’ Court in London on April 11, 2019. Assange, founder of the website WikiLeaks, has been a key figure in major leaks of classified government documents, cables and videos.

‘Tear down these prison walls’

At the start of the extradition hearing in February 2020, Assange’s legal team argued that Trump was trying to “make an example” of Assange as the trove of classified defense documents relating to Iraq and Afghanistan published by WikiLeaks revealed evidence of war crimes.

Lawyers for the US government argued that by publishing the diplomatic cables in an unredacted form, Assange had put the lives of sources and informants in “immediate” danger, and damaged the capabilities of US forces carrying out operations abroad.

“Reporting or journalism is not a license for criminality,” James Lewis, Counsel for the US government told the court.

Stella Moris, Assange’s partner and the mother of the couple’s two children, said on Monday that she was “pleased that the court has recognized the seriousness and inhumanity of what he has endured, and what he faces,” but noted that the charges against Assange had not been dropped.

Moris added that she is “extremely concerned” that the US government has decided to appeal the decision, saying that the move “continues to want to punish Julian and make him disappear into the deepest, darkest hole of the US prison system for the rest of his life.”

Addressing Trump, she said, “Mr. President, tear down these prison walls [so] that our little boys have their father. Free Julian, free the press, free us all.”

Moris has launched a Twitter campaign asking the US president to pardon Assange before he leaves office.

Julia Hall, Amnesty International’s expert on human rights in Europe said in a September 2020 statement that the implications of the extradition order could not be overstated.

“Silence this one man, and the US and its accomplices will gag others, spreading fear of persecution and prosecution over a global media community already under assault in the US and in many other countries worldwide,” she said.

Assange has been held in Belmarsh prison — one of the most secure facilities in England and Wales — since he was arrested by UK authorities in April 2019, after Ecuador revoked his right to political asylum.

He had been living at the Ecuadorian embassy in Knightsbridge since 2012, to avoid extradition to Sweden for an investigation over allegations of sexual assault and rape. Assange has always denied all of those allegations, which have all since been dropped.

He also welcomed the British court’s ruling, “because he is a journalist and deserves a chance.”

Nils Melzer, the UN’s Special Rapporteur on torture, has previously said that Assange displays “extreme stress, chronic anxiety and intense psychological trauma” after being subjected to several years’ worth of “progressively severe forms of cruel, inhuman or degrading treatment.”

Melzer met Assange in Belmarsh Prison in May 2019, and concluded that his health had been “seriously affected by the extremely hostile and arbitrary environment he has been exposed to for many years.”

He added that Assange was subjected to “oppressive isolation, harassment and surveillance inside the embassy,” as well as “deliberate collective ridicule, insults and humiliation.

“Moris said in an editorial published in the UK’s Daily Mail newspaper on Saturday that Assange had “been acting in the same way as any other journalist would, in attempting to hold the powerful to account.”

“Julian embarrassed Washington and this is their revenge,” she said