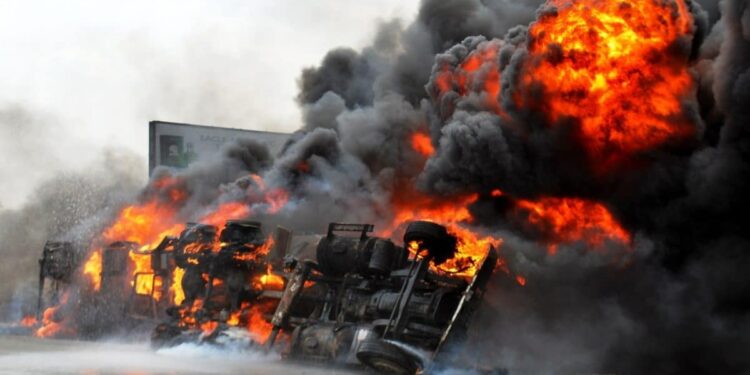 A 40ft truck laden with a container of fabric has on Saturday collided with a fuel tanker on Otedola Bridge inward Berger along the Lagos-Ibadan Expressway, as passengers and drivers escaped unhurt.

Reports have it that the truck had a brake failure while moving inward Berger, then collided with a tanker loaded with 33000 liters of Premium Motor Spirit (PMS), which immediately gutted fire.

Although no casualty was recorded, the inferno affected the 40ft containerised truck and high-tension wire.

A stationary truck with registration number KBG 91 XA containing PMS which was not involved in the collision was equally affected.

The Lagos State Police Command confirmed that no life was lost to the accident.

The command’s Police Public Relations Officer (PPRO), SP Olumuyiwa Adejobi in a statement released on Saturday said that the accident occurred around 2:30am.

Adejobi added that the State Commissioner of Police, Mr. Hakeem Odumosu, visited the scene for an on-the-spot assessment and evacuation to ease flow of traffic.

Man U in hunt for Osimhen as Ronaldo’s possible replacement