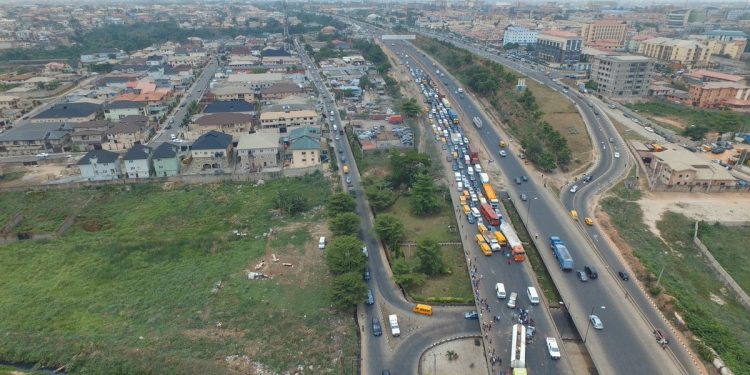 The Federal Road Safety Corps has ordered investigation into the cause of a fallen containerised truck that led to the death of one person around the Otedola Bridge, Lagos State.

It was gathered that the Mack truck, with two number plates, LSD 973 XM and FKJ 214 XY, lost control while ascending the bridge and in an attempt to park the truck, the container fell on a Toyota Camry with number plate, BDG 597 CY.

It was also gathered that a Toyota Wagon with number plate, JJJ 28 FR, was also involved in the crash, which occurred around 11.30am on Sunday.

The statement read in part, “The crash involved six occupants with one killed, while two males were confirmed injured. The injured has been taken to a hospital for treatment, while the driver of the Mack 20ft containerized truck fled the scene before the arrival of rescue teams.

“The driver who fled the scene of the crash would be apprehended and prosecuted once the owner of the truck is identified.”

LASEMA, in a statement by its Head of Public Affairs, Nosa Okunbor, said the remains of the deceased person had been handed over to his family.

He said, “The yet-to-be-identified injured truck driver conveying the fallen 40 feet container that crushed two vehicles, which left one driver dead, was hurriedly ferried to the Trauma Centre near the FRSC Office by old Lagos-Ibadan Toll Gate.

“The remains of the late driver of one of the vehicles, Mr Lawal, have been claimed by his relatives, as the agency worked assiduously to conclude the operation by deploying its light and heavy-duty rescue equipment to evacuate all impediments from the road to restore vehicular activities to the road.”