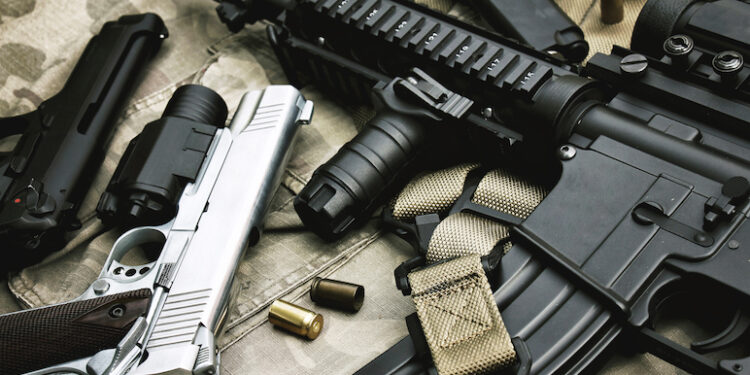 Operatives of the Special Anti-Robbery Squad (SARS) of Lagos State Police Command have arrested three gun makers, who allegedly supply weapons to notorious robbery gangs and cultists in the state and arrived Lagos to deliver guns to a wanted robber in Lagos.

The suspects, who have been in the illicit business for two years now, are Shapraku Umade, 19; Moses Anzuur, 19; and James Tsebee, 20.

The trio, who came from Adipo in Benue State, were arrested in a hotel in Lekki area of the state where they were waiting to deliver some guns to a notorious robbery suspect who has been on the command’s wanted list.

Responding to questions at the parade ground, Ikeja, on of the suspects, Umade, said he was a blacksmith and also fabricated the guns.

He had found his way to Lagos to demand his money from a buyer who purchased four guns at N30,000 and yet to pay.

“I learned the skill of fabricating guns from my late father, who died while I was in Junior Secondary School 3. He (late father) could only fabricate single-barrelled guns. I dropped out of school to continue from where my father stopped,” he confessed.

Umade said he enhanced his skills through some books on how to fabricate AK-47, SNG, revolvers and even pump action. “I buy metals from scavengers to fabricate the guns,” he told newsmen.

“I am not the only one who fabricates guns in my home town. We were strictly warned by our traditional heads never to sell them to outsiders,” he revealed.

Umade expressed that they only use the guns to defend themselves against herdsmen who invaded their community.

He continued, “Any time herdsmen come to attack us, people would bring their single-barrelled riffles to us to repair.”

Umade, who is a father of one, said during such attacks, the community would donate money which we would use to buy the materials to fabricate single-barrelled guns for our defence.

On why he came to Lagos, he said a man named Mayaki came to his village to buy four pistols from him at N30,000 with a promise to send the money

“I had to come to Lagos in search of him because I needed money to prepare for my second child, who is on the way.

“Mayaki lodged us in a hotel and still pleaded with me to be patient, while he sourced for money to pay. He later brought two of the guns through one of my brothers (pointing to one of the suspects).

“We were at the hotel when the police came to arrest us. Our traditional heads will be so disappointed if they hear this.”

Now Tsebe, claimed to be the marketer sourcing buyers for buyers for the two guns that were returned by Mayaki.

Anzuur said he only escorted Umade to Lagos being his first time to the city and that he was at the hotel to collect the N20,000 he gave Umade as transport fare to Lagos.

The police boss explained that information was received from a credible source that some arm merchants who are based in Adipo area of Benue State were bringing arms and ammunition to Ajah area of Lagos to sell to some armed robbers and cultists.

Following the information, SARS operatives were mobilised to Ajah to closely monitor the area. “The exercise paid-off as three of the arms dealers were arrested”.

“It was revealed that the suspects usually sell the guns to their Lagos collaborators. They have been in the illicit business for two years.