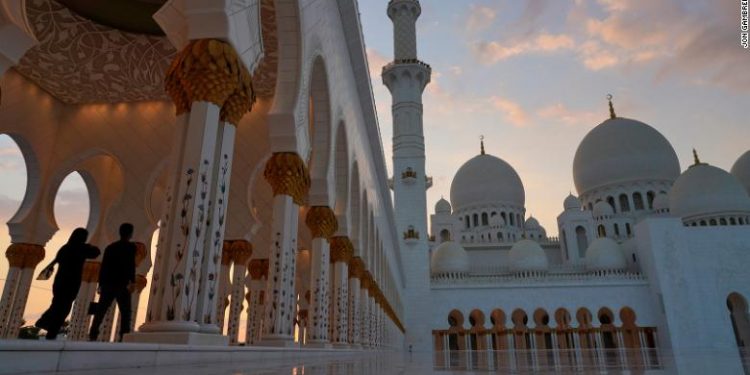 Tourists walk through Sheikh Zayed Grand Mosque at dusk in Abu Dhabi, United Arab Emirates, Wednesday, Dec. 9, 2020. Abu Dhabi announced Wednesday it would resume ???all economic, tourism, cultural and entertainment activities in the emirate within two weeks.??? It attributed the decision to ???successes??? in halting the spread of the coronavirus. (AP Photo/Jon Gambrell)

Abu Dhabi will only allow vaccinated people into some public spaces starting August 20, the government media office for the Emirati capital announced in a statement on Monday.

The Abu Dhabi Emergency, Crisis and Disasters Committee made the decision “after vaccinating 93 percent of target groups in the emirate and to preserve public health.”

Public places include shopping centers, restaurants, cafes, gyms, recreational facilities, sporting activities and all other retail outlets not within shopping centers, except those selling essential goods such as supermarkets and pharmacies.

The decision does not apply to unvaccinated people who were exempt from vaccination through the approved process, nor to children ages 15 and under.

The neighboring emirate of Dubai, with its economy heavily reliant on tourism, will not share the same rules.

The United Arab Emirates has one of the world’s highest vaccination rates. The country initially vaccinated residents with the Chinese-made Sinopharm shot but has since introduced other vaccines as well.

Despite the swift vaccine rollout, cases in the UAE have remained at roughly the same level of about 2,000 new cases per day for the past several weeks. Earlier this month, the UAE announced it would offer a booster shot to residents who had previously had two shots of Sinopharm.