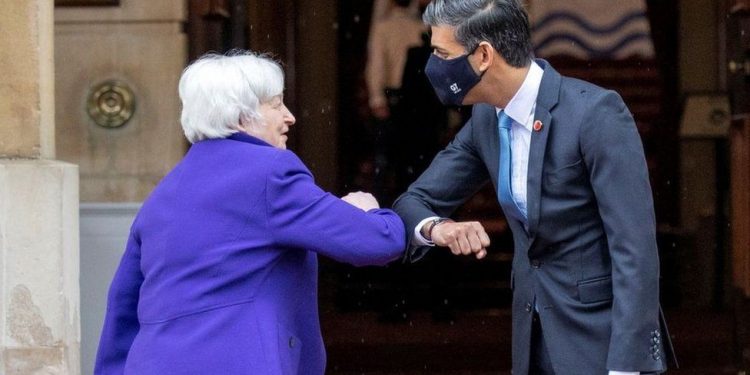 Officials from 130 countries have agreed to overhaul the global tax system to ensure big companies “pay a fair share” wherever they operate.

The OECD said on Thursday that negotiators had backed a proposed minimum corporate tax rate of at least 15%.

Tax on big tech firms has been a source of friction between the US and others.

The Organisation for Economic Co-operation and Development (OECD), which led the talks, said that the plans could generate about $150bn (£109bn) in tax revenues a year.

But the Paris-based organisation confirmed that Ireland and Hungary – countries with low corporate taxes – had not joined the deal on the global minimum.

All G20 countries, such as the US, UK China and France, did back the agreement.

Participating governments are now expected to try to pass relevant laws to bring in the minimum, although details such as possible exemptions for certain industries are still up for negotiation.

“A detailed implementation plan together with remaining issues will be finalised by October 2021,” said a statement signed by 130 out of 139 countries and jurisdictions involved in the talks.

Countries have also signed up to new rules on where the biggest multinational companies are taxed. They would see taxing rights on more than $100bn of profits shift to countries where profits are generated, rather than where a business might have its headquarters.

‘No nation has won this race’

The US Treasury Secretary, Janet Yellen, said the agreement sent a sign that a “race to the bottom” on tax rates was coming to an end.

“For decades, the US has participated in a self-defeating international tax competition, lowering our corporate tax rates only to watch other nations lower theirs in response.

“The result was a global race to the bottom: Who could lower their corporate rate further and faster?”

She said that “no nation” had won the race.

The Biden administration has been pushing for a deal internationally while it seeks to raise taxes domestically. It has, for example, called for an increase in the US corporate tax rate from 21% to 28%.

This agreement has been years in the making. The talks had lost momentum, reflecting to a large extent the United States’ lack of enthusiasm for either of the main proposals.

But that all changed with the new administration, which took power in Washington in January. President Joe Biden and his Treasury Secretary, Janet Yellen, wanted a deal and made specific proposals. They want to raise more tax to repair the public finances after the pandemic and to cover their spending plans.

A few countries have held out against the reforms, including three in the EU – Ireland, Hungary and Estonia, which have at least some corporate taxes below the proposed minimum.

If the deal works as planned, though, staying out won’t help them. It includes a “top-up” provision, so that a parent company would get an additional bill if a subsidiary paid less than the minimum.

The news was also welcomed by other finance ministers.

“I’m pleased to see this momentum has continued and welcome the OECD’s progress today.

“I look forward to continuing discussions with our global partners in the coming months with a view of finalising the details by October,” he said.

French Finance Minister Bruno Le Maire described it as the “most important international tax deal reached since a century” during a news conference.

And German Finance Minister Olaf Scholz said on Thursday that while details still needed to be worked out, the agreement marked “colossal progress” and would allow countries to increase spending on “important priorities” such as infrastructure and efforts to fight climate change.

Explaining its decision not to join the agreement, Ireland said it had not signed up because of reservations over the proposed corporate tax “floor”.

“Ireland expressed our broad support… but noting our reservation about the proposal for a global minimum effective tax rate of ‘at least 15%’,” the government said in a statement.

“As a result of this reservation, Ireland is not in a position to join the consensus.”