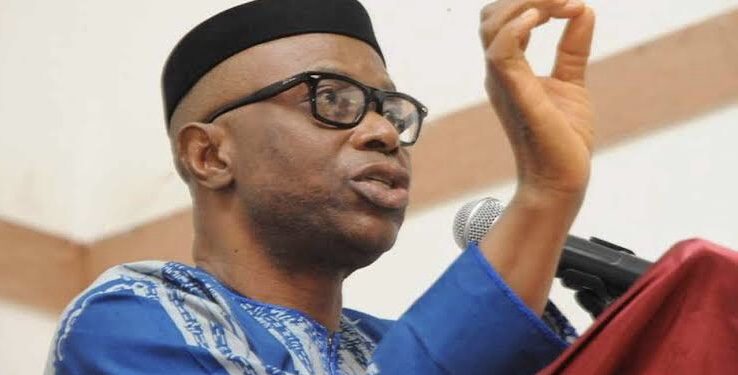 A former governor of Ondo State, Dr Olusegun Mimiko, has said the continent of Africa must liberate itself from mental slavery for its renaissance as the basis of a new global leadership paradigm to be meaningful.

Mimiko stated this while delivering his opening remarks at the 6th and 7th convocation lecture of Elizade University Ilara-Mokin in Ondo State on Thursday, October 20, 2022.

The convocation lecture delivered by the Vice President of the Republic of Liberia, Mrs Jewel Howard-Taylor, was titled, “Africa Renaissance: key for new global leadership paradigm.”

According to the former governor, the African states must drive development via an aggressive and improved productive capacity, saying this is development anchored on human skills, including an aggressive industrial policy aligned with an appropriate financial framework.

“But how can you sincerely develop improved productive capacity in which human skill is central if your universities are closed for upwards of eight months?” Mimiko queried.

He further stated that the continent must demonstrably address the issues of gender inequity and uncontrolled procreation with all fervency and a lot of commitment.

He said, “Africa must tackle gender inequity and uncontrolled procreative proclivity. It must re-imagine itself in international institutions within the present global order, which is already structured to limit our competitiveness.

Lauding the founder and Visitor of Elizade University, Chief Michael Adeojo, for his passion to develop his community of Ilara-Mokin and, his contribution to the body of knowledge as evident in the university’s standard.

“I am and have always been proud to be associated with this university, which by His grace was founded during my time as the governor of this state. Sir, that little acorn you planted about 10 years ago has become an oak tree, an ‘iroko’ tree of reckoning! – a university, with all its courses, fully accredited, that bears the mark of excellence that defines the Adeojo’s essence,” he eulogised.

In her lecture, Howard-Taylor said all stakeholders must continue to be gatekeepers to the nations in Africa.

“We must recognise that we are the greatest that God has created. I know my lineage and history.”

She tasked the African parents to be intentional and consistent in changing the mindset of the young people by teaching them morals and values embedded in African traditions.

The Liberian Vice President also charged the political leaders in Africa to embark on projects and programmes that will benefit the entire community as opposed to doing things for individual interests.