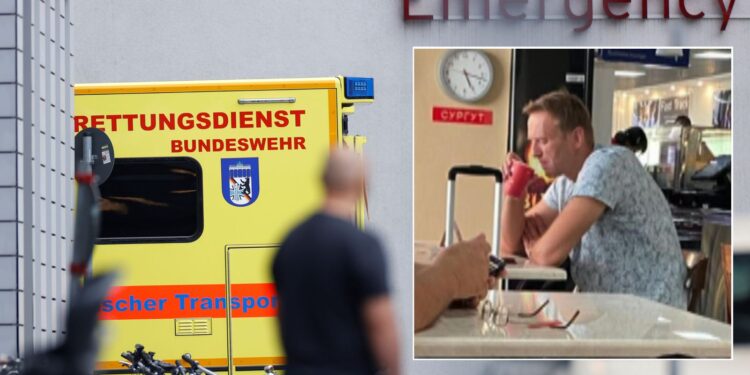 Alexei Navalny's supporters claim that the Kremlin is responsible for his illness. Pic: Reuters/@djpavlin

Mr Navalny’s supporters say doctors delayed the transfer until any poison in his system would no longer be traceable.

A prominent critic of Vladimir Putin has arrived in Germany for medical treatment, amid claims he became seriously ill after drinking a cup of tea laced with poison.

Alexei Navalny, who remains in a coma after his condition deteriorated on Thursday, was transported from a Siberian hospital to Berlin on a special medical plane.

The Russian opposition leader’s supporters claim that the Kremlin is responsible for his illness, as well as the delay in transferring him overseas.

Doctors in the Siberian city of Omsk have rejected the possibility that Mr Navalny was poisoned – suggesting a drop in blood sugar may have caused him to lose consciousness.

But Western toxicology experts have expressed doubts over whether a poisoning could be ruled out so quickly.

Early on Saturday morning, Mr Navalny’s spokeswoman Kira Yarmysh tweeted: “The plane with Alexei has taken off for Berlin. A huge thank you to everyone for your support.

“The struggle for Alexei’s life and health is just beginning and there will be much more to go through, but at least now the first step has been taken.”

Ms Yarmysh said Mr Navalny’s wife Yulia, who has been campaigning for his removal from the Siberian hospital, was also on board along with German medical specialists.

There was an extensive police presence outside the Charite Mitte Hospital Complex, which has a history of treating foreign leaders and dissidents.

Mr Navalny’s supporters believe he will have a better chance of recovery in the Berlin hospital, and have been critical of the care he has received in Siberia.

His arrival was punctuated by delays. Initially, his doctors in Siberia had said he was too unstable to be moved, despite a team of German specialists being dispatched to help.

The 44-year-old’s supporters said the doctors were stalling until any poison in his system would no longer be traceable.

Deputy chief doctor of the Omsk hospital Anatoly Kalinichenko later relented, saying Mr Navalny could be moved due to the fact his condition had stabilised.

He said the risk of the transfer had been “taken on” by Mr Navalny’s wife and brother.

The Kremlin deny that resistance to the transfer was political and say it was purely a medical decision.

It is not the first time Moscow has been accused of using poisoning as a tactic to threaten or remove unwanted opponents.

Previous high profile cases include the 2006 assassination of Alexander Litvinenko and March 2018 attack on Sergei and Yulia Skripal in Salisbury.

Leaders of France and Germany said on Thursday they were ready to assist Mr Navalny and his family, and called for an investigation into what had happened.

His flight to Berlin was organised by Cinema For Peace, a Berlin-based charity which supports film-based projects dealing with global humanitarian and environmental issues.

Jaka Bizilj, a film producer in the group, confirmed Mr Navalny’s safe arrival in Berlin to German tabloid Bild, telling them: “The condition of Navalny during the flight and after landing is stable.”

Mr Navalny had been in Siberia on a work trip, according to his allies, and earlier on the day he was taken ill he shared a photo on his official Instagram account showing him with a group of young supporters.

Like many other opposition politicians in Russia, Mr Navalny has been frequently detained by law enforcement and harassed by pro-Kremlin groups.

In 2017, he was attacked by several men who threw a chemical substance in his eye, leaving him partially blind.

Last year, Mr Navalny was rushed to a hospital from his prison cell where he was serving a sentence on charges of violating protest regulations. His team also suspected poisoning then.

Meanwhile, around 1500 people in the far eastern Russian city of Khabarovsk have taken part in a protest march over the arrest of a popular regional governor on murder charges.

It is the seventh consecutive weekend of protests since Sergei Furgal was detained in on 9 July.