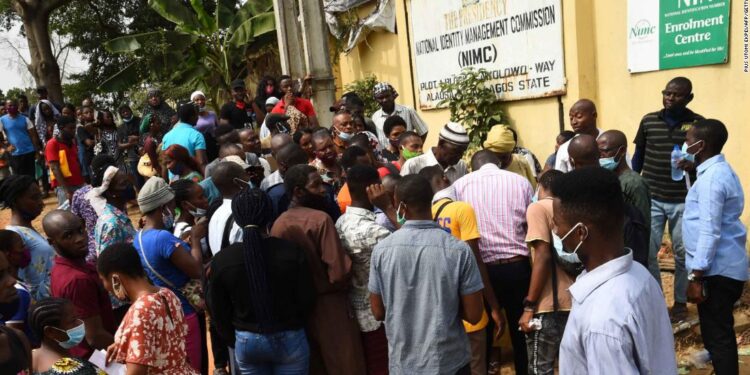 Doctors in Nigeria have criticized a mass national identification registration policy, involving tens of millions of citizens, as Covid-19 cases and deaths rise in the country.

Nigeria — which has Africa’s largest population — has recorded abouthalf of its more than 140,000 cases in the last 10 weeks, according to data from John Hopkins University.

“The number of cases has continued to rise, and it is putting undue pressure on our health facilities,” Mukhtar Muhammad, the national incident manager of the Presidential Task Force (PTF) on Covid-19, told CNN. “If we are not able to control the number of cases or provide more facilities, I am afraid certainly it is only a matter of time before the system becomes overwhelmed.”

Despite the ongoing health crisis, the Nigeria Communications Commission (NCC) has ordered phone operators in the country to block SIM cards not linked to a national identity number (NIN), used to bundle together biometric records such as fingerprints and headshots.

The policy was initially launched in February 2020 and the government has been issuing National Identification numbers since 2012. But in December 2020, it threatened to cut off the phone lines of tens of millions of Nigerians who did not register for an identity number and link it to their SIM card.

“It is a vital and important program, but, unfortunately, the government has started this exercise as the pandemic gets worse and the cases continue to rise,” Muhammad said.

The policy, which the government says is necessary for security reasons, has caused confusion and chaos as Nigerians, desperate not to lose phone numbers they have held for years, wait in line for hours at registration centers across the country.

CNN visited some of the centers, and observed minimal mask-wearing or social distancing in action.

Dr. Tunde-Oni Ibukun told CNN that rolling out the identity number policy should not be a priority during the pandemic.

“There is no sense to it,” he said. “It shouldn’t be a priority for the government right now. The centers are a breeding ground for the virus.”

Before the coronavirus pandemic, Ibukun says his private concierge health service, Private MD, was receiving five to 10 calls a day. Now it gets 20 to 30 calls daily — all related to Covid-19 — from patients desperate for life-saving oxygen.

“Covid has ramped up the level of work we do because hospitals are too busy,” he told CNN over the phone from his home in Lagos, Nigeria’s biggest city. “Once beds are filled, the hospitals can’t help anymore, so people turn to us.”

As the pandemic reaches its peak, there have been calls to postpone the registration drive until the virus is under control.

Isa Ali Pantami, the Minister for Communications and Digital Economy, is urging Nigerians to meet his deadline.

But the NCC has been forced to rethink its approach and has already extended the deadline three times, at short notice. The target date is now fixed for April 6 and around 200 new registration centers were recently opened to keep the numbers down.

So far, only 56 million NINs have been collected by mobile operators, according to a federal government press release.

Nigeria has a population of more than 200 million and many people carry three or four SIM cards to obtain the best network coverage.

Tamunowari Tetenta, a 20-year-old mechanical engineering student, says he has attempted to register for his NIN on nine different occasions in Port Harcourt, a city southeast of Lagos.

He sent a video to CNN, showing dozens of people being pushed up against a gate while attempting to jump the queue and avoid having to come back another day.

“The last time I went, there were 200 to 300 people with only some wearing masks,” he said. “The crowd pushed against the fence, and people couldn’t breathe. They were choking. In the end, the center only registered 60 that day.”

Gabriel Okoye, a 22-year-old student who works at a betting company in Lagos, said he attempted to register multiple times at “jam-packed centers” before he was eventually successful.

And a video sent to CNN by Peter Adejimi, a 27-year-old PR officer, shows a crowd of more than 100 people gathered at a registration site in Ilorin, the state capital of Kwara in Western Nigeria. Few were wearing masks, and there was little social distancing.

“Social distancing is enforced within our premises for applicants wishing to enroll and obtain the NIN, and the Commission will continue to do its best to institute and mandate full compliance to the protocols on the COVID 19 virus,” Aziz said.

“It is quite unfortunate that a large number of citizens and legal residents did not … enroll for their NIN until now,” he added.

Chaotic scenes are playing out across the country, with some Nigerians opting to camp out at registration centers from as early as 3 am., armed with sleeping mats, to secure a spot close to the start of the line, John-Paul Okezie, a photographer from Lagos, told CNN.

Okezie, 20, says he has tried to register on four separate occasions, but had to leave each time because the lines were too long.

The NIMC temporarily shut down registration centers on December 21, due to non-adherence to Covid-19 measures.

Enrolment was also halted on January 6 when some NIMC workers took part in industrial action because they feared they were being exposed to the virus. Nigerians were unable to register for NINs for two days until the strike ended after Aziz gave assurances that staff would be provided with better protective equipment.

Muhammad, from the presidential task force on Covid, said the centers were struggling to implement the recommended safety measures and that there is a lack of biometric capturing equipment to meet demand, describing the long lines and large crowds as a “recipe for infection.”

Reis Comfort attempted to get a NIN in Abuja on January 25, but after waiting for an hour, staff told her she would have to come back in March, when a machine would be available to capture her data.

“The process is slow and cumbersome. It is very frustrating,” she said.

But authorities say people must attend a center in person in order to get a NIN.

“Biometric capture requires the physical presence of the NIN applicant, based on the existing standards approved by the government. As technology advances, the commission will review and adopt new processes that limit human contact in our enrolment,” said Aziz.

And moving the registration process fully online is not an option in a country where internet connectivity is lacking. Less than half of Nigerians have broadband subscriptions while active mobile internet users fall well short of the total population, according to NCC data.

The federal government has not yet blocked any SIM cards, but anyone who loses their phone or has it stolen is not able to obtain a new line without first registering for a NIN.

This means they may have to go for weeks or months without a phone while trying to navigate the queues.

Eric Afam Ozegbe’s phone was stolen on Christmas Day. The IT entrepreneur has been unable to register and retrieve his phone line and says he was forced to borrow a different SIM from a neighbor while he attempts to get a NIN.

“The SIM is my personal number for the past 15 years,” he said. “Customers, friends, and family can’t reach me.”

The NIMC said the government regrets “inconveniences” like these, but that it is also “mindful of the long-term damage, effect and injuries” of using SIMs that are not properly registered.

“Security of lives and properties is the government’s primary responsibility, and we will continue to pursue all avenues necessary to secure and protect our people,” said Aziz.

Even when people manage to get a NIN, they must then integrate it with their SIM card by texting their service provider a code, a process that users say is sometimes glitchy.

Oyidiya Oyika Alfred, a 49-year-old business owner from Lagos, says it took her several attempts over a few weeks before she stopped receiving error messages when trying to send the code.

Okoye says he too has been unable to integrate his NIN and SIM card, receiving similar error messages.

Nigerians have been unduly stressed out by the government’s rushed and ill-timed policy, Dr. Folajimi Adebowale, a medic based in Lagos, told CNN.

“The terribly short notice, poor sanitation, and poor preparation all make the experience of registering a stressful one for Nigerians and puts them at risk of having Covid or transferring it to their loved ones,” he said.

Nigeria’s healthcare system was already fighting endemic diseases before the pandemic. The country accounted for over a fifth of global malaria deaths in 2019; northern Nigeria lies within the sub-Saharan “meningitis belt” and the nation has the second largest HIV epidemic in the world.

“Covid isn’t the biggest killer in Nigeria, but it has made healthcare more difficult,” said Adebowale. “What it is doing to the health system can be compared to strangling an asthmatic patient.”