by The Lagos Today
in World News, Breaking
2 min read
0
0 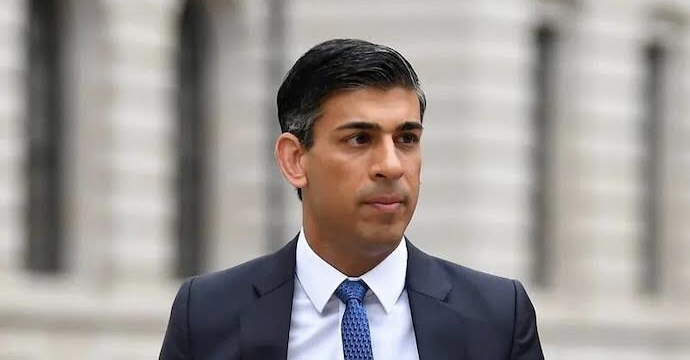 The former Chancellor of the Exchequer, Rishi Sunak, in charge of the UK’s money, has been named as the new leader of the conservative party and prime minister of Great Britain.

He was the only nomination for the new leader of the party after Penny Mordaunt withdrew.

Former Prime Minister Boris Johnson dropped out of the contest on Sunday evening after saying it was not the “right time” for him to try and make a comeback as leader.

He then called on his supporters to get behind the former chancellor for the unity of the Conservative Party.

House of Commons leader, Penny Mordaunt, had been trying to secure the support of the 100 MPs needed by the 2pm deadline – but in the end she withdrew, meaning Mr Sunak was the only one left in the contest.

Some MPs who supported Ms Mordaunt in the race to be prime minister said that in the end they had encouraged her to back Mr Sunak because they felt having a leader by this afternoon was better for the country than a week-long contest.

This win means he becomes the new Tory Party leader on Diwali – the Hindu festival of lights – as well as the first UK prime minister from an Indian background.

Who is Rishi Sunak?

You might recognise him as someone who was on TV a lot during lockdown.

He took the role of chancellor not long before the coronavirus pandemic broke out and during that time he made lots of big decisions about how the UK should spend its money.

Some of the measures he introduced were popular with the public, for example the furlough scheme which gave money to support people who weren’t able to work due to businesses closing.

He also gave money to support businesses, and introduced schemes like the ‘Eat Out to Help Out’ which was aimed to increase how much people were spending and help get the economy get going again after lockdown came to and end.

But the scheme was later linked to a spike in infections, while others think he spent too much money during his time as chancellor which could cause more problems for the UK economy in the long term.

Some people were also very angry about millions of pounds of government money being spent on a ‘Test and Trace’ app which didn’t work properly – a decision made by Mr Sunak.

US, UK Security Alert: We Will Strengthen Structures For Pro-activeness- NPF