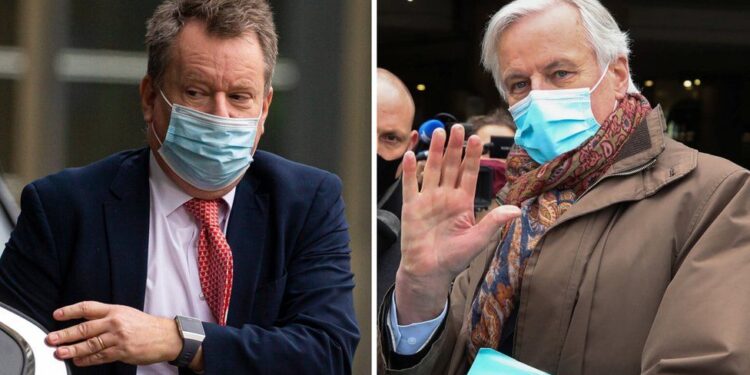 Talks between the UK and EU are due to resume in Brussels in a final bid to reach a post-Brexit trade deal.

Disputes over fishing and business competition rules are still going on, but the UK government said there was “still time to reach an agreement”.

The EU mood was described as “downbeat” ahead of chief negotiator Michel Barnier meeting the UK’s Lord Frost.

If no deal is done by the end of the year, the UK and EU will introduce tariffs and border checks on goods.

EU sources suggested on Sunday evening that a breakthrough in talks on fishing was close to being made, but Downing Street denied this, with Irish Foreign Minister Simon Coveney later saying the claim had not been “borne out by the facts”.

The EU says that, without ongoing access to UK waters for its fleets, UK fishermen will no longer have special access to EU markets to sell their goods.

But the UK argues that what goes on in its own waters should be under its control as a sovereign country.

The UK and EU are also at loggerheads over “the level playing field” – a set of shared rules and standards to ensure businesses in one country do not have an unfair advantage over their competitors in others.

Brussels wants the UK to adhere to EU rules on workers’ rights, environmental regulations and state aid, but the UK says the goal of Brexit is to break free from following common rules and reassert national sovereignty.

The two sides also disagree on how any future trading disputes should be resolved.

The British Chambers of Commerce has warned businesses are unprepared for changes that will come when the Brexit transition period – under which the UK remains in the European single market and customs union – ends in 24 days’ time.

Mr Coveney told the BBC the talks were not going well and there had been “no progress at all” on Sunday.

He added that Mr Barnier’s assessment was currently “downbeat”.

But Foreign Office Minister James Cleverly told BBC Breakfast the UK would keep negotiating “for as long as we have available time or until we get an agreement”.

Talks with the EU “often go to the last minute of the last day”, he added, saying there was “still time”.

If the EU and UK agree a deal, it will have to be turned into legal text and translated into all EU languages, then ratified by the European Parliament before 31 December.

The UK government is likely to introduce legislation implementing parts of any deal reached, which MPs will be able to vote on.

The 27 EU national parliaments may also need to ratify an agreement, depending on the contents of the deal.

Later on Monday, the UK Internal Market Bill will return to the House of Commons.

Certain clauses could allow the government to break international law, by overriding elements of its original Brexit treaty with the EU, known as the withdrawal agreement.

The EU is unhappy with those clauses, as is the House of Lords, which voted to scrap them.

But the government is still backing its measures – which could cause tensions in the trade talks – and is expected to push them through the Commons on Monday evening.

The Taxation (Post-Transition Period) Bill, which contains more powers to break the legal requirements of the withdrawal agreement, will also return to the Commons this week.

And on Thursday, EU leaders will meet in Brussels for a two-day summit where they could sign off a deal, if the two sides can reach an agreement by then.