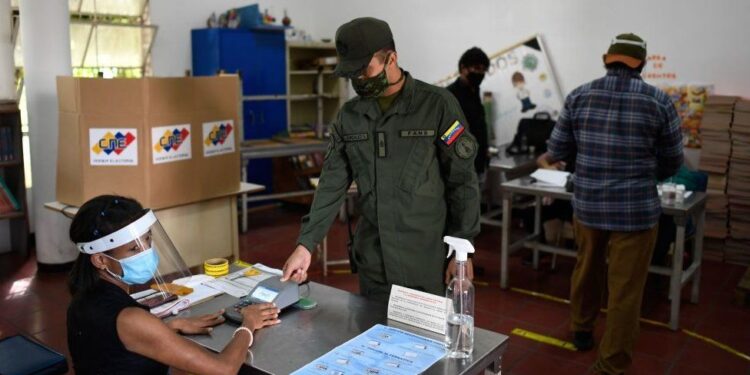 President Nicolás Maduro’s party and his allies have won in Venezuela’s legislative elections that were boycotted by the main opposition parties, according to partial results.

This means he now has total control of the country’s political institutions.

His coalition secured 67.6% of the votes with over 80% of ballots counted, the National Electoral Council said.

The boycott is being led by opposition leader Juan Guaidó who has been in a two-year power struggle with Mr Maduro.

The US and more than 50 other countries recognise Mr Guaidó as Venezuela’s legitimate leader.

The opposition bloc which broke the boycott and took part received 18% of the vote, and turnout was 31%, NEC President Indira Alfonzo said.

US Secretary of State Mike Pompeo has described Sunday’s poll as “a fraud and a sham”.

“The results announced by the illegitimate Maduro regime will not reflect the will of the Venezuelan people,” he posted on Twitter.

The Organization of American States (OAS) has also said it will not recognise the result.

After casting his vote on Sunday, Mr Maduro said the election would mark the beginning of an era of recovery for Venezuela.

Referring to the recent US elections, he called on the opposition to “take advantage of Donald Trump’s defeat” and join him in urging Joe Biden’s incoming administration to abandon sanctions against the country.

Up until now, the National Assembly has been the only remaining branch of government in opposition control – but that’s set to change on Sunday. The result is a foregone conclusion because the opposition isn’t taking part.

Juan Guaidó, the current head of the National Assembly, and the man that for nearly two years has claimed a constitutional right to lead the country because of fraudulent elections, will be out of a job – and his future uncertain.

He insists he’ll remain in Venezuela to fight the government of Nicolás Maduro, but people here seem tired of politics, and many have lost faith both in the government and the opposition. All they want, with an economy in constant freefall, is for their lives to get better – and politicians haven’t succeeded so far.

Turnout was predicted to be low, with witnesses reporting many polling stations empty or with few people in the queue. The longest queues in the capital, Caracas, were in Socialist Party strongholds, the AFP news agency reported.

Precautions to prevent the spread of Covid-19 were in place, with voters required to wear masks and observe distancing inside polling stations. Venezuela has reported more than 104,000 cases of coronavirus and 916 deaths since being hit by the pandemic.

Polls were due to close officially at 18.00 (22.00 GMT), but election officials extended voting for another hour “while there are voters in the queue”.

A recent opinion poll indicated that 62.2% of Venezuelans “do not support” either Mr Maduro or Mr Guaidó.

Venezuela’s 277-seat National Assembly has been controlled by the opposition since 2015.

As the legislative assembly, it would normally pass legislation and approve the government’s budget, but it became sidelined in 2017 when President Maduro convened a National Constituent Assembly.

The National Constituent Assembly is made up exclusively of government supporters and its powers supersede those of the National Assembly.

Mr Guaidó called on voters to boycott the vote on grounds that there were no “free and fair” conditions for holding elections.

He told AFP last week that Mr Maduro wanted to wipe out all semblance of democracy.

“Maduro’s objective isn’t even to gain legitimacy,” he said.

Mr Guaidó has already announced that he will hold a week-long “popular consultation”, a kind of referendum, from Monday in which he will ask Venezuelans whether they accept the results of the National Assembly election.

Although Mr Guaidó has been recognised as interim leader by more than 50 nations, Mr Maduro retains the loyalty of most of the military and important allies such as China and Russia.

Under the Maduro government, the economy has collapsed and shortages of food and medicines have become widespread.

According to the United Nations refugee agency (UNHCR), there are currently about 4.5 million refugees and migrants from Venezuela worldwide.