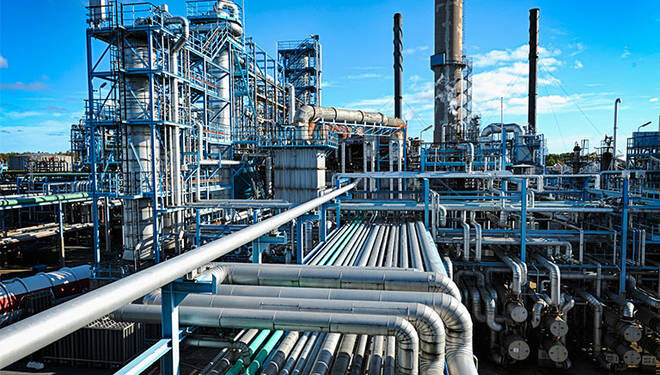 The BUA Group and Axens, a French-based petroleum technology company, have declared significant progress in the construction of the multi-billion-dollar integrated 200,000 barrels per day refinery in Akwa Ibom State.

This is coming about 6 months after both firms signed an agreement for the supply of process technologies and the design of the facility.

BUA said that the French President, Emmanuel Macron, commended its Chairman, Abdul Samad Rabiu, for his commitment to developing lasting relationships between French and Nigerian businesses.

The statement said that this came as the French Minister for Foreign Trade and Economic Attractiveness, Franck Riester, paid a visit to the BUA Group Headquarters in Lagos where he handed over a personal invitation from Macron to Rabiu to attend the Choose France Summit in June in Paris representing business leaders from Nigeria and Africa.

The French minister also witnessed the signing of a progress acknowledgement statement between BUA Group and Axens of France for the proposed refinery project, according to the statement.

Also, the BUA chairman had been appointed Chairman of the France Nigeria Investment Club.

Rabiu said BUA had so far initiated partnerships and had developed personal relationships with a few French businesses, including Axens.

He expressed confidence in the quality of expertise and technical know-how of the French companies BUA had partnered with.

Rabiu pointed out that the BUA refinery would reduce the huge cost of transporting Nigerian crude offshore, refining it and bringing it back into the country when fully operational.

He said that the choice of Akwa Ibom for the refinery was due to the huge availability of raw materials and its proximity to export petroleum products to regional countries.

The President of Axens, Jean Sentenac, in his statement, said he was pleased that the project was advancing on schedule and expressed delight for the very good cooperation between all the involved parties, reiterating the commitment of Axens in delivering the BUA Refinery Project on time and with the highest standards.

The completion and take-off of the refinery owned by the BUA Group would come as a huge boost for the Federal Government’s effort to stop the importation of refined petroleum products, ensuring that the country becomes a net exporter of these products.

This will also help to conserve the scarce foreign exchange as the completion and take-off of the Dangote refinery and other similar refinery projects will help ensure self-sufficiency in the country.

The BUA Group, just a few days ago, was listed as one of the companies with an active refinery license from the Department of Petroleum Resources (DPR).

Sustainability is a key pillar of the “Year of the 50th” campaign, taking place to commemorate the UAE’s golden jubilee celebrations