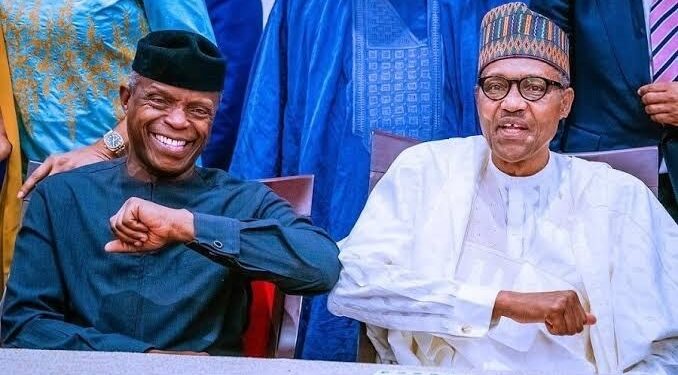 The Executive Director, National Primary Health Care Development Agency, Faisal Shuaib, has said that President Muhammadu Buhari, alongside Vice-President Yemi Osinbajo would be vaccinated for Covid-19 in a live telecast.

Other prominent individuals such as the Secretary to the Government of the Federation, Boss Mustapha, among others, would also be vaccinated during the telecast, in a bid to drive awareness.

He said at the weekly press briefing by the Presidential Task Force on COVID-19 in Abuja on Thursday, “On Tuesday, I mentioned that we will like to see a situation where Mr. President, the Vice President, the SGF, critical leaders come and take the vaccine in full glare of the public to demonstrate that this vaccine is safe.

“So, we have to make provisions for those. But even in developed countries, what we have seen is that apart from the prioritisation of health workers, you have to also identify critical leaders that you don’t want them to be wiped off by the virus.”

Shuaib said experience had shown that vaccines are always better than health immunity.

He said for COVID-19, it would take approximately 10 years for one to be able to achieve health immunity and many people would have died if health immunity is to be relied upon.

The PTF said it was in talks with the National Identity Management Commission on observation of safety protocols at its registration centres across the country.

It stated that all ministries, departments and agencies of government, as well as their chief executives, must comply with the protocols established by the task force in carrying out official activities.

The National Coordinator of the PTF, Dr Sani Aliyu, stated this while answering a question on the NIMC’s crowded centres, occasioned by the rush to meet the deadline for mobile telecoms subscribers to link their National Identity Number with their Subscriber Identification Module or risk disconnection.

Aliyu said, “With regard to mass greetings, whether you are a government entity or private sector, all protocol applies across the board. We have been liaising very closely with NIMC; in fact, my phone is probably on fast dial as far as the NIMC DG is concerned.”

According to the PTF coordinator, the challenge the NIMC is having is with the crowds that are outside its premises.

“That challenge definitely needs to be addressed and we have been working with them,” he stated.

Earlier in his opening remarks, the national coordinator noted that compliance with the safety measures is “for our own interest.”

The SGF and Chairman, PTF, Boss Mustapha, raised the alarm that some Nigerian international travellers have continued to present fake results when travelling outside the country.

He also announced that the President had approved the establishment of at least one new Oxygen plant in each state of the federation, while the existing ones would be made fully functional.

“Efforts are being made to increase the supply of oxygen to our health facilities across the country. Mr. President has approved the establishment of at least one new Oxygen plants in each state of the Federation, while the existing ones will be made fully functional.

“It has become embarrassing to note that some Nigerians continue to present fake results when travelling outside the shores of this country. This remains a major source of concern to the Federal Government.

“The PTF has directed private laboratories to put in place measures to validate results and ensure that all passengers are registered on the travel portal before samples are processed to stop this activity,” Mustapha said.

The SGF also expressed concern of the PTF about the increasing daily numbers of infections, saying as of January 6, 2021, Nigeria recorded 1,664 infections.

He said, “This is yet another all-time high in Nigeria and we must all take full responsibility through compliance and vigilance. It is better to wear a face mask than being on a ventilator.”

The Director, Hospital Services, Federal Ministry of Health, Dr Adebimpe Adebiyi, expressed optimism that Nigeria would benefit from the “first wave” of the COVAX vaccine allocation.

She said, “The implementation of the oxygen availability intervention plan for all the states plus FCT as approved by the Federal Government has commenced.

“Facilities will be prioritised based on the severity of the gaps identified such as degree of need or the degree of unavailability oxygen determines the first beneficiaries of the intervention.

“Some countries have started rolling out vaccines and Nigeria is exploring all available options to acquire vaccines for our people. We are confident that Nigeria will benefit from the ‘first wave’ of the COVAX vaccine allocation.”