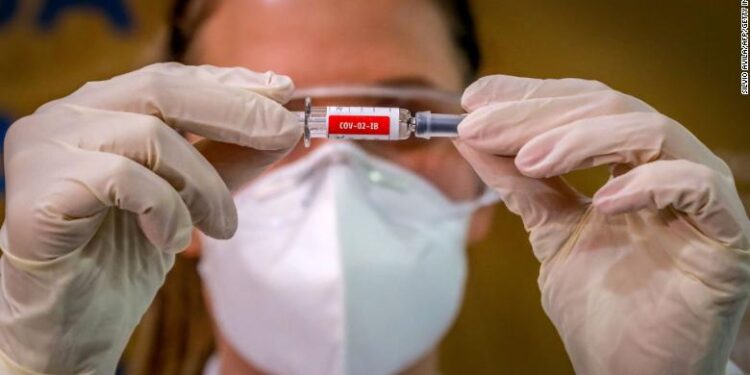 A leading Chinese Covid-19 vaccine developed by Sinovac Biotech was just 50.38% effective in late-stage trials in Brazil, significantly lower than earlier results showed, according to a statement published by the government of Sao Paulo Tuesday.

While the number exceeds the threshold required for regulatory approval, it falls far below the 78% previously announced, raising questions as to the veracity of the data and fueling skepticism over the apparent lack of transparency regarding Chinese vaccines.Analysts said the efficacy rate of Sinovac’s Coronavac vaccinein Brazil — the lowest among its global competitors — could affect international confidence in Chinese-made vaccines and hamper Beijing’s effort to repair its image from its early mishandling of the initial outbreak by providing Covid-19 vaccines to developing countries.

“The Butantan Institute and the Government of Sao Paulo report that the coronavirus vaccine achieved a 50.38% overall efficacy rate in the clinical study conducted in Brazil, in addition to (an efficacy rate of) 78% for mild cases and 100% for moderate and severe cases of Covid-19. All rates are higher than the 50% level required by the WHO (World Health Organization),” the statement released Tuesday said.

The razor-thin margin for regulatory approval is likely to lead to concern among scientists, given that last week the Butantan institute released partial “clinical efficacy” results celebrating 78% to 100% efficacy in preventing infections.

The state body financed the phase 3 trials of the vaccine, which involved 13,000 health workers across eight Brazilian states. 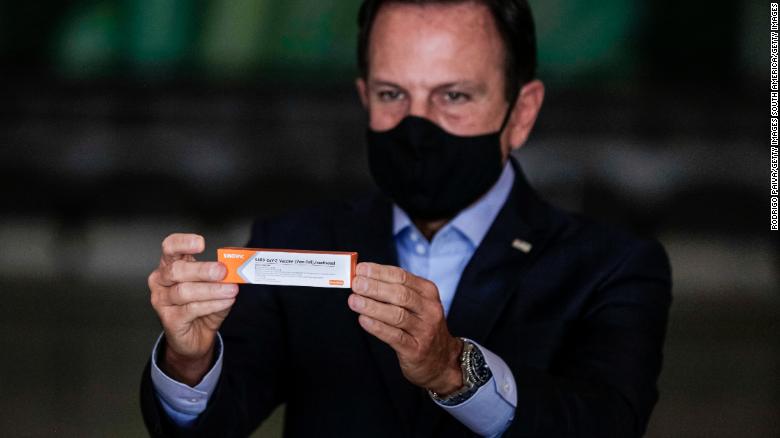 Sao Paulo Gov. Joao Doria holds a box of Sinovac’s Coronavac vaccine during a news conference on November 19, 2020 in Sao Paulo, Brazil.”Regarding the overall efficacy of the analysis, we met the requirements of the World Health Organization with 50.38%,” Ricardo Palacios, medical director for clinical research at the Butantan biomedical center in Sao Paulo said Tuesday during a news conference.

However, on Tuesday, high-ranking members of the Brazilian Health Ministry told CNN affiliate CNN Brasil that “the effectiveness is borderline,” and that because “It is at the limit.

We have to wait for ANVISA (Brazilian Health Regulatory Agency) to evaluate.”A representative of Sinovac said the company is discussing the result but declined to give further comment.

The final efficacy rate of the vaccine will be determined by China’s drug regulator, the National Medical Production Administration, according to the representative.

Yanzhong Huang, a senior fellow for global health at the US based Council on Foreign Relations, described the 50.38% efficacy of the Sinovac vaccine as a “disappointing” result that had caught him by surprise.

The results suggest Coronavac is less effective than alternative vaccines developed by Pfizer-BioNTech and Moderna, which have an efficacy rate of about 95%.

Russia says its Sputnik V vaccine is 91% effective, while the UK’s vaccine, developed by Oxford University and AstraZeneca, has an average efficacy of 70%.

The Sinovac vaccine is also less effective than its domestic Chinese competitor, developed by the state-owned Sinopharm, which it says is 79.34% effective.Despite the worse than anticipated results, Huang said the Sinovac vaccine would still be “usable” by helping to relieve pressures on healthcare systems while reducing potential deaths, given its higher efficacy for moderate and severe cases that would require medical treatment.

China has promised millions of coronavirus vaccines to countries globally. And it is ready to deliver themHowever, its low overall efficacy could hinder Sinovac’s ability to expand its market share globally, Huang said.Sinovac has signed deals to provide 46 million doses of its Covid-19 vaccine to Brazil, 50 million doses to Turkey and 7.5 million doses to Hong Kong.

It’ll also supply 40 million doses of vaccine bulk — the vaccine concentrate before it is divided into vials — to Indonesia for local production.”Since many countries are planning to order, or have already ordered Sinovac’s vaccines, it might undermine people’s willingness to take them, because people may question the usefulness of the vaccines,” Huang said. “It could be a potential stumbling block.”

A lack of transparency has been a major concern clouding Chinese-made vaccines, which Chinese President Xi Jinping has pledged to make “a global public good.

“Both Sinovac and Sinopharm have faced questions regarding the release of data.

When announcing its efficacy results, state-owned Sinopharm did not provide details on its clinical trial data.

A Sinopharm executive said detailed data would be released later and published in scientific journals, without giving a timeline.

There is also the issue of discrepancy in results from clinical trials conducted in different places.

Having largely eliminated the coronavirus inside its borders earlier last year, Chinese drugmakers had to look abroad for places to test the efficacy of their vaccines.

But the results reported so far are far from consistent.

China approves Sinopharm Covid-19 vaccine, promises free shots for all citizensSinopharm’s efficacy rate of 79%, for example, is lower than the 86% announced by the United Arab Emirates for the same vaccine in December.

Sinovac’s vaccine has had wildly different results from three countries: Indonesian drug regulators say interim data from Phase 3 trials showed it is 65.3% effective and gave it the country’s first emergency use approval; Turkey says it is 91.25% effective; And in Brazil, the two significantly different efficacy rates announced a week apart have further sparked questions.

Last week, Brazil’s health regulator agency ANVISA told the Butantan Institute that in order to approve the emergency use of a vaccine, the global efficacy rate had to be made publicly available — information the Institute had not received at the time from Sinovac, according to CNN Brasil sources.ANVISA will meet on Sunday to decide on two requests for emergency use of both the Coronavac vaccine and the Oxford University AstraZeneca vaccine.

The news could potentially hinder China’s own coronavirus vaccination drive too, Huang warned.China has inoculated tens of thousands of people with Sinovac’s vaccine since July under a government-approved emergency use program, which includes at least three Chinese vaccine candidates.

In total, it has administered 4.5 million doses of coronavirus vaccine under emergency use, and is planning to vaccinate 50 million people ahead of February’s Lunar New Year celebrations.

Chinese public health experts have repeatedly told the public they are confident that Chinese-made vaccines are at least as good as, if not better, than foreign alternatives, Huang said.

“If people learn about this, they might start to question the safety and efficacy of the Sinovac vaccine, or even other Chinese-made vaccines,” Huang said.

“I think the government will need to do some convincing work, on either those who have already taken the shots, or are about to do so.”