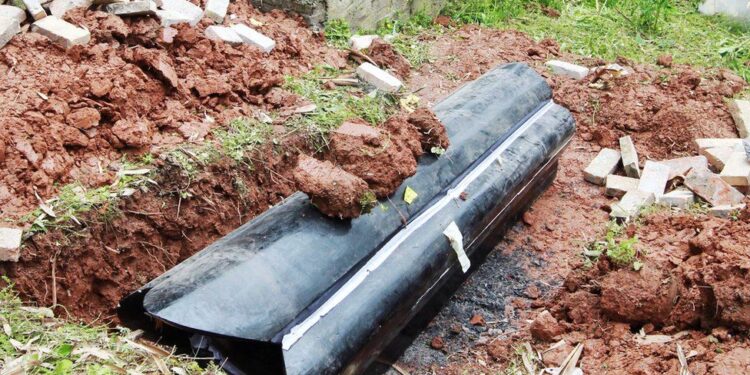 A Chinese man with Down’s syndrome was kidnapped and killed as part of an elaborate body swap scheme.

There is a ban on burials in many parts of China – to get around this, one family hired someone to provide them with a substitute body, which was cremated in its place.

But unbeknown to them, the body provided was that of a murdered victim.

The murder took place in 2017 but only gained prominence last week after an article on the incident emerged online.

The hired man – identified only by his surname Huang – has been handed a suspended death sentence, according to the Guangdong Higher People’s Court.

According to court documents, Huang had in 2017 been offered money by the family to provide them with another body as they wanted their deceased family member to have a traditional burial.

The family live in Shanwei city in Guangdong province, which requires all dead bodies to be cremated.

But while the family assumed he would look for another dead body, he killed someone in order to fulfil the deal.

Spotting a man with Down’s syndrome picking litter from the street, Huang asked him into a car and gave the victim alcohol until he passed out.

He then put the victim’s body into a coffin and days later it was passed on to the family in exchange for money.

The family then proceeded to have that coffin cremated pretending it was their own deceased relative.

The relative’s actual body was then buried in secret in a traditional way.

After the victim’s disappearance in 2017, he was reported as a missing person.

It took police more than two years though to uncover the crime and track down the accused.

In September 2020, Huang was given a suspended death sentence, which he appealed against.

This was eventually dismissed by the Guangdong Higher People’s Court in December 2020 and a suspended death sentence was upheld. This means that if he does not reoffend after two years, the sentence will be commuted to life in prison.

The family who hired Huang were found guilty of “insulting a corpse”, but were not handed a prison sentence. It is unclear if they had to instead pay a fine.

The story only gained nationwide prominence last week after a news outlet published a feature with the victim’s family.

A traditional burial is favoured in China, with people investing heavily in funerals and coffins, believing that doing so is a way of showing filial piety towards their ancestors.

But China has increasingly been campaigning for people to refrain from burying their dead and in some regions there is an outright ban on burials.

This is intended to save land and discourage extravagant burial ceremonies.

A regulation dating back to 1997 stipulates that “densely populated regions with relatively little land and convenient transport should practice cremation.

“Those regions which cannot meet such requirements are allowed to conduct burials”.

Body swapping is not unheard of in China, and mostly occurs in rural areas where more people put stress on following traditional burial ways.