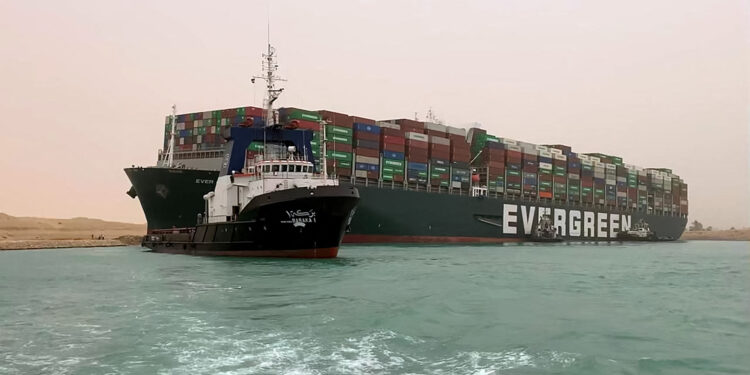 Egypt will impound the giant container ship that blocked the Suez Canal last month until its Japanese owner pays $900m (£652m) in compensation.

One of the Ever Given’s insurers, UK Club, said the Suez Canal Authority had rejected its offer to settle the claim.

It described the claim, which includes $300m for a salvage bonus and $300m for loss of reputation, as “extraordinarily large” and “largely unsupported”.

The Ever Given is anchored in the Great Bitter Lake, the canal’s midway point.

The 400m-long (1,312ft), 220,000-tonne ship became wedged diagonally across the waterway on 23 March after running aground amid high winds and a sandstorm that affected visibility.

It was freed six days later, after a salvage operation involving a flotilla of powerful tug boats and dredging vessels that shifted an estimated 30,000 cubic metres (1.1m cubic ft) of mud and sand.

More than 400 vessels had to wait to pass through the 193km (120-mile) canal, which connects the Mediterranean Sea to the Red Sea and provides the shortest sea link between Asia and Europe.

The chairman of the Suez Canal Authority (SCA), Osama Rabie, said on Tuesday that the Ever Given had been “seized due to its failure to pay $900m” in compensation, Egyptian state media reported.

The figure was based on the “the losses incurred by the grounded vessel as well as the flotation and maintenance costs”, he added.https://emp.bbc.com/emp/SMPj/2.40.2/iframe.htmlmedia captionThe stranded container ship is seen finally on the move and no longer blocking the canal

UK Club – which insured the ship’s owner Shoei Kisen Kaisha for third-party liabilities, including damage caused to infrastructure or claims for obstruction – said in a statement that it had been negotiating in good faith with the SCA “despite the magnitude of the claim”.

“On [Monday], a carefully considered and generous offer was made to the SCA to settle their claim,” it added. “We are disappointed by the SCA’s subsequent decision to arrest the vessel.”

“We are also disappointed at comments by the SCA that the ship will be held in Egypt until compensation is paid, and that her crew will be unable to leave the vessel during this time.”

UK Club said the SCA had not provided a detailed justification for its claim, noting that the grounding resulted in no pollution and no reported injuries.

It also said the claim did not include the fees of the specialist salvage company brought in to help refloat the Ever Given, which the owner and another insurer expected to pay separately.

A spokeswoman for Shoei Kisen Kaisha confirmed to Agence France-Presse that the Ever Given’s fate was “in the legal arena”.

The Ever Given’s technical managers, Bernhard Schulte Shipmanagement, also expressed disappointment with the decision on Wednesday in a statement confirming that inspections by the American Bureau of Shipping, the vessel’s classification society, had been concluded.

“The vessel has been declared suitable for onward passage to Port Said where she will be assessed again before departing for Rotterdam,” it said.

The Ever Given’s 25 Indian crew members had been co-operating fully with the Egyptian authorities and their investigation into the grounding, including granting access to the vessel’s voyage data recorder and other materials and data, the statement added.

“The crew on board remain in good health and good spirits, fulfilling their duties to the highest of standards. BSM is in regular contact with the crew and has offered support to the seafarers’ families.”