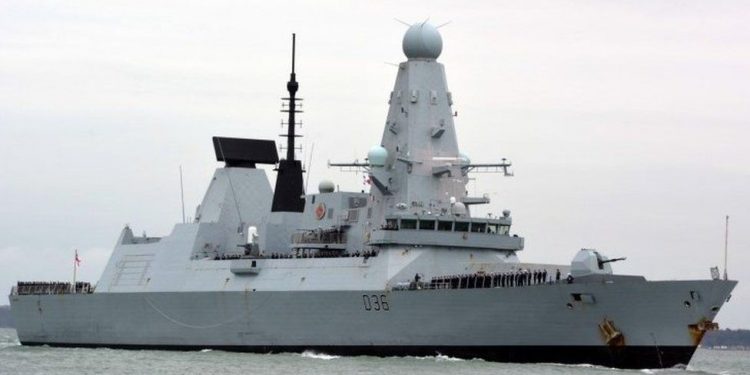 Classified Ministry of Defence documents containing details about HMS Defender and the British military have been found at a bus stop in Kent.

One set of documents discusses the likely Russian reaction to the ship’s passage through Ukrainian waters off the Crimea coast on Wednesday.

Another details plans for a possible UK military presence in Afghanistan after the US-led Nato operation there ends.

The government said an investigation had been launched.

The Ministry of Defence (MoD) said it is investigating “an incident in which sensitive defence papers were recovered by a member of the public”. The MoD employee concerned reported the loss at the time, it said.

The documents, almost 50 pages in all, were found in a soggy heap behind a bus stop in Kent early on Tuesday morning.

A member of the public, who wishes to remain anonymous, contacted the BBC when he realised the sensitive nature of the contents.

The BBC believes the documents, which include emails and PowerPoint presentations, originated in the office of a senior official at the MoD.

The documents relating to the Royal Navy’s Type 45 destroyer, HMS Defender, show that a mission described by the MoD as an “innocent passage through Ukrainian territorial waters”, with guns covered and the ship’s helicopter stowed in its hangar, was conducted in the expectation that Russia might respond aggressively.

On Wednesday more than 20 Russian aircraft and two coastguard ships shadowed the warship as it sailed about 12 miles (19km) off Crimea’s coast.

Moscow’s defence ministry said a patrol ship fired warning shots and a jet dropped bombs in the destroyer’s path but the UK government rejected this account, denying any warning shots had been fired.

The mission, dubbed “Op Ditroite”, was the subject of high-level discussions as late as Monday, the documents show, with officials speculating about Russia’s reaction if HMS Defender sailed close to Crimea.

“What do we understand about the possible ‘welcome party’…?” asked an official at Permanent Joint Headquarters (PJHQ), the UK’s tri-service headquarters at Northwood.

Recent interactions in the eastern Mediterranean between Russian forces and a Carrier Strike Group led by HMS Queen Elizabeth had been unremarkable and “in line with expectations”, the document said.

But officials knew this was about to change.

“Following the transition from defence engagement activity to operational activity, it is highly likely that RFN (Russian navy) and VKS (Russian air force) interactions will become more frequent and assertive,” one presentation warned.

A series of slides prepared at PJHQ shows two routeing options, one described as “a safe and professional direct transit from Odessa to Batumi”, including a short stretch through a “Traffic Separation Scheme” (TSS) close to the south-west tip of Crimea.

This route, one slide concluded, would “provide an opportunity to engage with the Ukrainian government… in what the UK recognises as Ukrainian territorial waters.”

Three potential Russian responses were outlined, from “safe and professional” to “neither safe nor professional”.

In the event, Russia chose to react aggressively, with radio warnings, coastguard vessels closing to within 100 metres and repeated buzzing by warplanes.

An alternative route was considered, which would have kept HMS Defender well away from contested waters.

This would have avoided confrontation, the presentation noted, but ran the risk of being portrayed by Russia as evidence of “the UK being scared/running away”, allowing Russia to claim that the UK had belatedly accepted Moscow’s claim to Crimean territorial waters.

“As the public would expect, the Ministry of Defence plans carefully,” an MoD spokesperson said.

“As a matter of routine, that includes analysing all the potential factors affecting operational decisions.”

Alongside the military planning, officials anticipated competing versions of events.

“We have a strong, legitimate narrative”, they said, noting that the presence of the embedded journalists (from the BBC and Daily Mail) on board the destroyer “provides an option for independent verification of HMS Defender’s action”.

Following the controversy generated by HMS Defender’s mission, the documents discovered in Kent confirm that passage through the TSS was a calculated decision by the British government to make a show of support for Ukraine, despite the possible risks involved.

Was this gunboat diplomacy?

It was certainly the use of a warship in pursuit of diplomatic goals. But its primary objective was not to “poke the Russian bear” (a phrase and sentiment conspicuously absent from the documents). This was all about freedom of navigation and a clear endorsement of Ukraine’s sovereignty, following Russia’s annexation of Crimea in 2014.

Under the terms of the 1982 UN Convention on the Law of the Sea, the passage of a foreign ship is regarded as “innocent” when “it is not prejudicial to the peace, good order, or security of the coastal state.”

In the eyes of much of the world, that state is Ukraine, not Russia.

The documents don’t stop there.

The bundle includes updates on arms exports campaigns, including sensitive observations about areas where Britain might find itself competing with European allies.

There’s a whiff of post-Brexit anxiety in comments attributed to “SofS” (Defence Secretary Ben Wallace), who insists that the six-member European Organisation for Joint Armament Cooperation (OCCAR), of which Britain is a member, “must not be hijacked” by “entryism” from the European Commission.

And there are briefing notes for last Monday’s session of the UK-US Defence Dialogue, including observations on President Joe Biden’s first months in office.

The Biden administration’s early focus on China and the Indo-Pacific, they say, show “there is still much continuity from the previous administration.”

There are also suggestions of what Britain should be asking for.

“We should use the meeting to see how much the administration is prepared to share, or whether its stated ambition of consulting more with allies is truer in principle than in practice.”

Most of the papers are marked “official sensitive”, a relatively low level of classification used, according to the government, “where there is a clear and justifiable requirement to reinforce the ‘need to know'”.

But one document, addressed to Ben Wallace’s private secretary, and marked “Secret UK Eyes Only”, outlines highly sensitive recommendations for the UK’s military footprint in Afghanistan, following the end of Operation Resolute Support, the Nato operation currently winding down in the wake of President Biden’s decision earlier this year to withdraw American forces.

The document discusses an American request for British assistance in several specific areas, and addresses the question of whether any British special forces will remain in Afghanistan once the withdrawal is complete.

Media reports have already suggested Britain is considering leaving some forces behind.

Due to the sensitivity of the document, the BBC has decided not to report details which could endanger the security of British and other personnel in Afghanistan.

But amid reports of a worsening security situation in the country, it sounds several warnings.

“Any UK footprint in Afghanistan that persists… is assessed to be vulnerable to targeting by a complex network of actors,” it says, noting that “the option to withdraw completely remains.”

The reduced presence of Nato forces “is already impairing the situational awareness that we (and the US) used to enjoy across the country”.

No Britons have been killed in Afghanistan since the US-Taliban deal in February 2020, it says, but “this would be unlikely to remain the status quo”.

Rarely has a collection of lost documents covered such a wide range of important areas. This is a major embarrassment for the Ministry of Defence, which is currently carrying out a detailed investigation into how the papers came to be lying on a street corner, in the rain, in the early hours of Tuesday morning.

John Healey, Labour’s shadow defence secretary, said he was surprised documents had got out of the Ministry of Defence at all. He said he wants Mr Wallace to complete the investigation quickly and report to the House of Commons this week to reassure the public that no military operations had been put at risk.