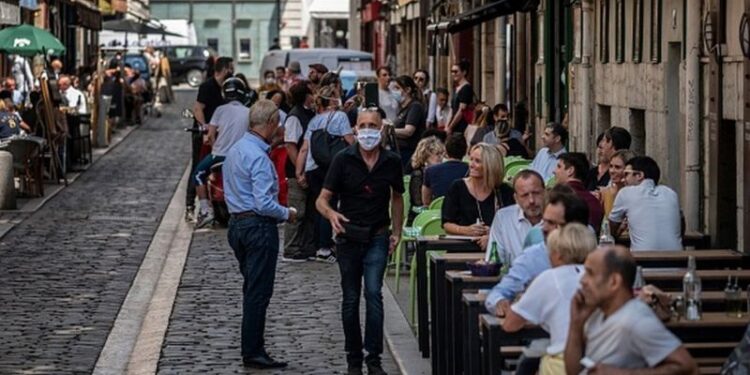 The French government has imposed tighter coronavirus restrictions in four more cities with high infection rates, as a number of European countries see a surge in cases.

The cities of Lyon, Lille, Grenoble and Saint-Etienne will become zones of maximum alert from Saturday.

Bars and restaurants will have to close, as they did in Paris earlier this week and Marseille last month.

The measures were announced as France saw a near-record 18,129 new cases.

“The situation has deteriorated in several metropolises in recent days,” French Health Minister Olivier Veran said at a news conference on Thursday. “Every day, more and more people are infected.”

France’s maximum-alert level comes into force when the infection rate in a locality exceeds 250 infections per 100,000 people and at least 30% of intensive care beds are reserved for Covid-19 patients.

Hospitals in the Paris region moved into emergency mode on Thursday, as coronavirus patients took up almost half of intensive-care beds.

France’s coronavirus situation mirrors that of other European countries, including the Netherlands, Poland, Ukraine and the Czech Republic, which all reported record increases in daily cases on Thursday.

Even Germany, a relative success story of the pandemic in Europe, has started to see what its health minister has called a worrying rise in cases.

A large proportion of the rise in coronavirus cases globally is being driven by outbreaks in Europe, the Americas and South-East Asia.

On Thursday, the World Health Organization (WHO) reported a record one-day increase in global coronavirus cases, with the total rising by 338,779 in 24 hours.

Germany saw its highest daily rise in infections since April, with confirmed cases rising by almost a third to more than 4,000.

At a news conference, RKI President Lothar Wieler said Germans must be wary of what he called the “prevention paradox” – the feeling that measures were no longer needed because case numbers were relatively low.

“The current situation worries me a lot. We don’t know how the situation in Germany will develop in the coming weeks. It’s possible we’ll see more than 10,000 new cases a day, it’s possible the virus will spread out of control,” he said.

German Health Minister Jens Spahn praised the German people for their “prudent actions” in integrating the rules into their day-to-day lives, but added: “We must not gamble away this achievement.”

He pointed the finger at large groups of socialising young people, who “think they are invincible”, for failing to follow the rules on social distancing and hygiene and welcomed the curfews on evening entertainment introduced by Berlin and Frankfurt.

As the autumn school holidays get under way in Germany, rules for domestic travel have also been tightened and include a ban on overnight stays in hotels or holiday apartments for anyone coming from “risk zones” where infection rates top 50 per 100,000 inhabitants.

Germans have also been urged to avoid travelling abroad during the holiday period.

There are already bans on large gatherings in areas with high infection rates, testing at airports for people arriving from high-risk countries and fines for anyone failing to wear face coverings in shops or on public transport.