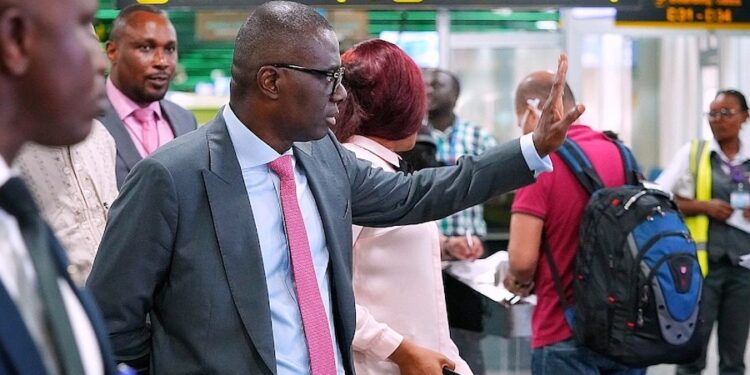 Local airlines plying the Lagos to Abuja route have witnessed a sluggish 40 percent customer patronage, after a week of resuming operations.

Initially, they had witnessed an encouraging 70 per cent traffic across some of the local carriers. However, with increasing Covid-19 induced travelling unenthusiasm and low patronage, without any intervention the airlines are slowly heading towatfs6 rocky financial waters.

The airlines have beckoned the Federal government to speedily release intervention funds and reopen international routes, as a panacea to their losses.

However, experts have warned that reopening the international airspace must be accompanied with removal of the mandatory 14-day quarantine directive for returning travellers, else the airlines still risk lower patronage.

Flight movement within Lagos, Abuja and Port Harcourt yesterday confirmed low patronage. Flights from Lagos to Portharcourt, only 44 passengers onboard, both in-bound and out-bound, respectively, on Air Peace; Arik Air also recorded a total of 77 passengers plying that same route.

With load factor (occupied seats per total availability on a flight) ranging between 15 and 50 per cent – depending on airline, route, flight and time – operators would continue to struggle to meet cost.

One of the local operators said they could not even recoup the cost of fuel flying Lagos-Abuja route with only 48 instead of 120 passengers onboard.

“A colleague told me he just departed with about 45 passengers on a plane that sits 150 persons. At N30, 000 per traveller, he almost left with nothing after paying for fuel and some of the sundry charges. That is a lot of money gone down the drain because of low patronage,” he lamented.

The Spokesman of Arik Air, Mr. Banji Ola, said the passenger traffic was slowly increasing. Compared to an average of 60 per cent load factor that the airline started with last week, Ola said Arik was still within the 50 per cent benchmark, with three flights on Lagos-Abuja route per day.

The Managing Director of Aero Contractors, Mr. Ado Sanusi, similarly said that the airline’s average load factor was between 15 and 30 per cent – a far cry from a commercial aircraft’s breakeven limit, although he described the development as “expected” following three months of COVID-19 induced lockdown on flights.

Meanwhile, a recent survey conducted by the International Air Transport Association (IATA), has shown that at least three in every 10 air travellers have vowed not to travel via aircraft any time soon, over Coronavirus fears.

From the data recorded, more travellers have also attested to be taking more precautions on Covid-19, such as washing their hands more frequently, lavoiding large meetings and wearing a nose mask, in public.

Spokesperson of Dana Air, Kingsley Ezenwa, said the flying public needed a lot of awareness to understand that the cabins, in compliance with High Efficiency Particulate Air (HEPA) filter protocol, are now safer than most open places.

Also, the Chairman, Airline and Passenger Joint Committee (APJC), Mr. Bankole Bernard, has assured that traffic on the city’s airlines would surge, in due time. He further urged the government to permit international flights to resume, describing local and foreign flights as complementary.

The international airlines, under the umbrella of IATA, however, urged governments in Africa and the Middle East (AME) to implement alternatives to quarantine on arrival to allow economies re-start while avoiding importation of COVID-19 cases.

With over 80 per cent of travellers unwilling to travel when quarantine is required; the impact of these measures is that countries remain in lockdown even if their borders are open.