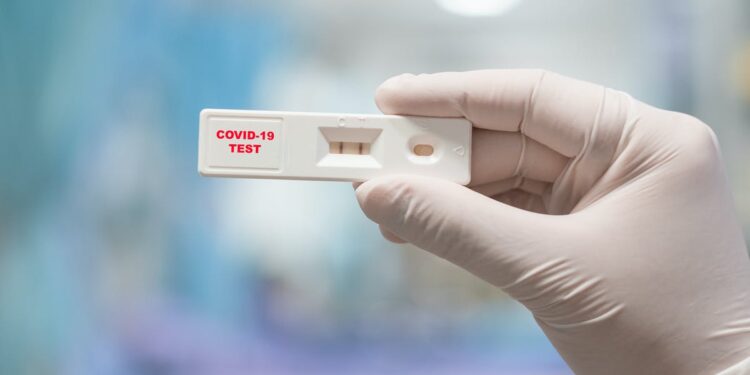 A few days after Lagos State Governor Babajide Sanwo-Olu announced that the fourth wave of the coronavirus pandemic was over in the state, the state government has announced reduction in the fee charged by accredited private laboratories for the polymerase chain reaction (PCR) test.

The government also announced changes in surveillances strategies to avoid the spread of the infection in and around the states.

It also said a list of 200 defaulters of the nation’s travel protocol has been submitted to the country’s Presidential Steering Committee on COVID-19 for deactivation of their international passports for one year.

These were contained in a statement issued by the government on Wednesday and signed by the director of public affairs unit of the ministry of health, Tunbosun Ogunbanwo.

The statement, which quoted the state’s commissioner for health, Akin Abayomi, said the decisions were taken by the state’s COVID-19 management structure and approved by Mr Sanwo-Olu.

“The cost was reviewed by Lagos State COVID-19 Incident Command Structure and approved by Governor Babajide Sanwo-Olu. The reduction in cost was to cut the expenses to be incurred by citizens who need the PCR tests for travel, work, or other purposes other than COVID symptoms or contact tracing,” the commissioner said.

According to the statement, the commissioner called on citizens, particularly inbound passengers who are required by law to test on arrival, to book, pay and present themselves at any of the accredited laboratories’ consortium at approved days for their tests on arrival in the state.

The commissioner said additional reviews will be made in due course, especially as the ongoing COVID-19 vaccination campaign gains momentum.

He cautioned those involved in presenting fake PCR and COVID-19 vaccination cards at the airport or registering as children under 10 years to bypass the national guidelines or providing false COVID related information.

Mr Abayomi said those acts will not be tolerated.

He said: “These acts will not be tolerated as they represent the main catalyst of all the four waves which have had major impact on the State public health systems and the economy.

“Whilst we understand that it may not have been the fault of passengers but facilitated by unscrupulous individuals assisting them, we have taken a decision not to submit their passports for deactivation by the Presidential Steering Committee, in the first instance, but give them an opportunity to present themselves at our mobile court to defend themselves and help identify where they are obtaining the fake documents if applicable.”

The commissioner disclosed that confirmed defaulters would be subjected to fines or community service, saying the acts are criminal in nature.

“In the meantime, we have submitted the first 200 names of individuals who have failed to present themselves at the mobile courts to the Presidential Steering Committee (PSC) and their passports have been deactivated for a period of one year.

“These will be published in the dailies in the coming week and the next set of names will follow in the coming month. We encourage all those who have received a text message to present themselves at the mobile court to avoid these sanctions,” the commissioner stated.

Mr Abayomi, however, noted that PCR tests at approved public health laboratories and sample collection centers around the State remains absolutely free for citizens who need to test for COVID; ”either because they have COVID like symptoms or have been exposed to a positive case”.

On January 20, 2022 while giving the COVID-19 update, Mr Abayomi, through his verified Twitter account, @ProfAkinolaAbayomi said consistent decrease in COVID-19 case positivity indicates the end of the fourth wave in the state.

Mr Abayomi said there was a reduction in positivity rates of COVID-19 infection from 29.3 per cent recorded on December 21, to 1.9 per cent as of January 20.

According to him, bed capacity utilisation now stands at two per cent, and fatality rate stands at 0.71 per cent.