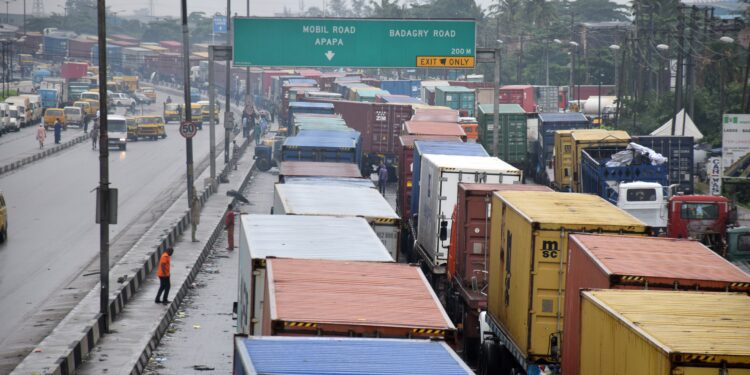 There are more worries as efforts to restore sanity to Oshodi-Apapa Expressway and Apapa ports have proved futile despite the introduction of an electronic call-up system known as ETO.

Stakeholders have also lamented that two months after the implementation of the system, there seems no end in sight to Apapa gridlock as container-laden trucks and tankers have continued to park indiscriminately on port access roads.

Recall that the Lagos State Government, Nigerian Ports Authority (NPA), and other stakeholders agreed to adopt a new electronic call-up system for trucks, which commenced on February 27, to find a permanent solution to the problem of truck congestion around Apapa and its environs.

The electronic truck call-up system was also designed for the management of truck movement and access to and from the Lagos Ports Complex, Tin Can Island Ports, and Apapa ports in Lagos. All trucks doing business at the ports are required to park at the approved truck parks until they are called up into the port through the Eto app.

Stakeholders explained why the Apapa gridlock has defied electronic solutions, as the situation worsens daily. Amid total neglect and nonchalant disposition to duty, motorists, commuters, and truck drivers in Apapa environs have called for immediate intervention by Lagos State Government over the dilapidated road and poor traffic management along Oshodi-Apapa Expressway, Mile-2 Tin can Port access road. The call came following two weeks of agonising gridlock that has subjected road users to untold hardship, crippling business activities as well as danger to lives and property.

ETO has collapsed completely as operators abandon the system, parking indiscriminately on the road. The improvised opening at the road median by Otto Wolf, along the Oshodi-Apapa Expressway has compounded the gridlock, as vehicles struggle to pass through as the only way out and into the port access roads, coupled with several ongoing road rehabilitation in the axis.

Seizing the opportunity of the situation, traffic robbers in possession of dangerous weapons, daily rob motorists and commuters of their valuables day and night. And despite several public complaints and calls for help, there is no police team patrolling the area giving the robbers, confidence, and space to operate at will.

The President, Association of Maritime Truck Owners (AMATO), Remi Ogungbemi, lamented that there were irregularities and corruption in the e-call up system. He accused the police and NPA of frustrating the smooth operation of the system through extortion, saying Apapa traffic had become a commercial entity for some people benefitting from the situation.

Ogungbemi said corruption had taken a higher dimension with lots of fake e-call up slips in circulation, in which the holders are allowed to access the ports before the holders of genuine slips. He said trucks with genuine slips were detained outside the gate for days, making the operatives of the NPA and security operatives impound their trucks.

The AMATO boss said everyone involved in the management of traffic in Apapa axis should be removed and new people brought in, adding that the situation required collective effort to deal with permanently.

The President, Council of Maritime Transport Unions and Associations (COMTUA), Leye Thompson, said the e-call up system had failed to address Apapa gridlock due to the wrong implementation of the system.

He said the NPA, at the commencement of the electronic call up system, said trucks without the Terminal Delivery Order (TDO) should not be allowed to access the port.

He said contrary to the order, trucks without the TDO documents access the roads, noting that if things continued that way, there would be no end to the Apapa traffic menace.

Thompson faulted the NPA for not rendering appropriate services to truckers that paid for the service, noting that the agency is extorting the people without providing services to them.

Thompson also lamented that the NPA only captured the container-laden trucks in the Eto system, leaving out petroleum tankers and articulated vehicles, which he said had compounded the menace on the roads.

He said there was no measure put in place to end Apapa gridlock that would work if all heavy-duty trucks, articulated vehicles, and petroleum products tankers are not captured in the system.

On allegations that COMTUA task force extorts truckers, Thompson debunked the allegations, adding, however, he had disbanded enforcement on the side of the union after several derogatory complaints.

He said the union had also left Apapa port roads to avoid corruption allegations, adding that despite leaving the roads, the situation had become worse.

Thompson claimed that the union had welcomed the Eto system while campaigning and sensitising the public to embrace it through the various advertorials on radio and television, which he claimed cost the union over N1 million.

The National Coordinator of Save Nigeria Freight Forwarders, Importers and Exporters Coalition (SNIFFIEC), Osita Patrick Chukwu, alleged that the NPA, affluent individuals and the government had politicised Apapa gridlock management, accusing them of taking advantage of the situation.

He said the NPA deliberately left out the oil sector from Apapa gridlock as owners of oil firms and tank farms are affluent people and those at the top echelon of government.

He said including them in the measures to address the Apapa menace would affect their political agenda. “It is not a poor man that owns tankers, tank farms or oil firms, some of the owners have liaised with the top government officials to ensure they leave the tankers out of the solution to the Apapa gridlock,” he lamented.

Chukwu said impunity and corruption were major factors hindering a successful solution to Apapa gridlock, warning that except there was strict enforcement, some people would continue to take advantage of the situation to extort and exploit innocent masses.

The Deputy National President, Air Logistics, National Association of Government Approved Freight Forwarders (NAGAFF), Dr. Segun Musa, described the e-call up system as a fire brigade approach that would not stand the test of time.

He said the system was only meant for haulage trucks, instead of extending it to all articulated vehicles visiting the ports. He also accused security agencies and task force teams of taking advantage of the situation, noting that reports reaching him revealed that they are making millions of naira on a daily basis from controlling traffic.

Musa accused the task force of creating artificial traffic to stop trucks and extort money from them, not minding the consequences on other road users.

“The gridlock is caused by the Lagos State Government putting criminals and thugs on the roads to collect illegal fees; we also have the Customs arresting already cleared cargoes on the roads without minding the gridlock that would be caused for that action,” he lamented.

He alleged that the NPA refused to engage critical stakeholders in finding solutions to the menace, but engaged those without ideas of the challenges or business at the port.

A source at NPA, who spoke on condition of anonymity, confirmed that the e-call up system, had been hampered by tank farms and petroleum products tanker drivers that blocked all the access roads.

He said the approach road to Apapa port, from Ijora, Eric Moore, Mile 2, Coconut, Sunrise, and other areas had been taken over by tanker drivers.

The NPA source said their indiscriminate parking blocked the movement of container-bearing trucks called up to the ports, thereby making their tickets timeframe elapse.

He lamented that more than 30 tank farms between Coconut and Mile 2 down to Satellite do not have parks and holding bay for tankers, as they park by roadsides before accessing loading bay and terminals.

He, however, said one must be extremely careful in dealing with the tanker drivers as the tank farms supply a significant amount of petrol being used in the nation.

He said chasing the tankers from the roads with security operatives would create problems for the nation.

Another source at the NPA Tin Can Port, said due to the extortion by area boys, hoodlums and security operatives, transportation fare rose from N1.2 million to N1.5 million within Lagos, from to the initial range of N200,000 to N300,000.

The source said CCTV cameras and an electronic barrier system have been installed at the entrance of the Tin Can Port to scan barcode generated on the e-call up ticket towards detecting counterfeit slips.

“Once the barrier system is completed, there won’t be an issue of faking tickets, the barcode on the tickets would be used to open the gate for the trucks to gain access into the ports,” he said.

During a visit to the Tin Can Island Port at the weekend, operatives of the NPA traffic management were seen trying to tow trucks parked indiscriminately by the roads, but the truck drivers, tanker drivers, and hoodlums put up resistance.