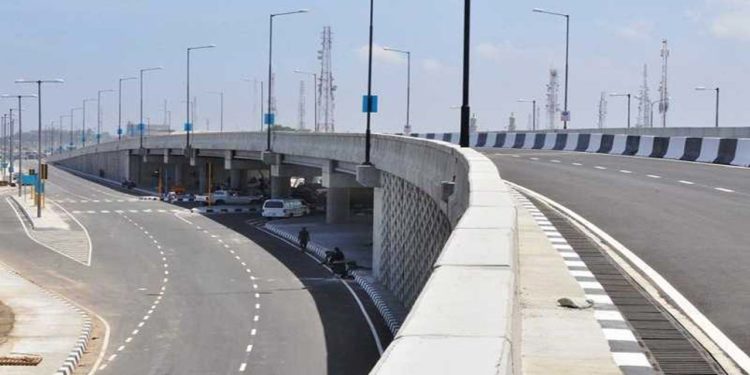 She sat at a corner of her space under the bridge at Empire, Surulere area of Lagos, shivering in the cold with her eyes wide open in the dark and isolated space, she hugged herself to warm, as the rain dropped on her from some openings in the bridge.

Her name is Blessing Okon. But the cataract of challenges fate has plunged her into, leaves her wondering if she could ever live to manifest her name.

She has been living on the street for five years with her daughter, before officials of the Lagos State Government picked her up and others with mental disorders at the Lagos State Rehabilitation and Training Centre, Owutu road, in the Ikorodu area of the State, from where she was taken to Rehabilitation Center by a good Samaritan.

However, during treatment, her condition was discovered to be depression orchestrated by her ejection from her one-room apartment on Vining street, Idi-Araba and her husband’s inability to pay for another accommodation.

She was also discovered to have excess alcohol in her system because she drowned herself in alcohol, in an attempt to provide temporary relief from the overwhelming situation and attendant sexual molestation from men while living under the bridge.

Her two months of treatment at the hospital expired on September 16, 2022. But it may amount to nothing, as she is likely to return back to the street, except a miracle of accommodation for her happened.

The mother of one in this interview with Crime Guard, traced the genesis of her predicament to 2017, when her husband, Samuel, a gardener at the Lagos State University Teaching Hospital, Idi-Araba was arrested and remanded at the Kirikiri Correctional Centre in Lagos for stealing some bottles of beer.

Narrative of the predicament that led her to the psychiatric home, the 28-year-old Akwa-Ibomite who left her home town in 2015, for Lagos, after losing her widowed mother, said, “I met Samuel, five years after I came to Lagos. He was a gardener at LUTH.

“I had my baby towards the end of 2017. In 2018, my husband and a man from Ibadan stole some bottles of beer at a party. His friend managed to escape. But my husband was unlucky. They beat him and took him to the office of the Oduua People’s Congress from where he was handed over to the Police. The case was charged to court and he has been at the Kirikiri prison since then.

“As if that was not enough, our building on 2, Ewunmi street, Idi-Araba was sold and our new landlord evacuated the tenants.

“Since there was no money to rent a new apartment, I took my eight months old baby and started living on the streets.

“Some people told me to come live in front of their shops First, I was living in front of people’s shops and homes but their intention was to take my child from me and I didn’t want that. So, I had to leave their homes and decided to be sleeping from one bridge to another, with my baby.”

Asked why she didn’t go back to her village or reached out to her relatives, she replied, “I am from a poor family.

“My siblings are also battling to survive.

“I have nobody to go stay in the village. My father died when I was barely one year old.. Our family’s house in the village has collapsed. I have five siblings. The eldest is a single parent that is struggling to fend for her seven children.”

She disclosed that, “sexual harassment made me leave the bridge at the stadium, for empire, only to discover that the situation was not different.”

She said several times some men would pack their cars opposite and approach her to have sex with her, offering her money. At other times, she said some would want to forcefully have their way.

Some members of the community who noticed she was not mad, had to hire a deaf and dumb to chase the intruders at night.

During such visits, the deaf and dumb as gathered would haul stones at the strangers and at the same time raise the alarm.

When Crime Guard visited the empire bridge which used to be home for Blessing and her five-year-old daughter, traders at a shopping complex opposite the bridge confirmed that they knew her.

Some of them said they rendered help to her because of her baby.

One of the traders who identified herself as Alhaja Hasanat, said, “when she was here, I personally gave her money to buy food because of her daughter. She was a good woman. All she needs is assistance. We knew she was not mad. The only problem was her alcohol intake.”

One of the outstanding assistance she got was from Mr Kenneth Obaraye, who took Blessing’s five-year-old child home and enrolled her in school.

He also mobilised members of the public to raise money that was used for Blessing’s treatment at the Neuropsychiatric Hospital.

Speaking with Crime Guard, Obaraye said, “when Lagos State Government officials came to pick her and other destitute, she was locked up with mad people, whereas she was not mad.

“Someone spoke on her behalf to be taken for treatment and I took it upon myself to pay for the treatment. I have spent approximately N500,000.

“Her two months treatment has ended. But I was given two weeks’ grace to look for accommodation for her. But the social worker advised that areas like Mushin and Surulere should not be considered.”

When this reporter visited Blessing at Adejoke Orekoya ward, at the Federal Neuropsychiatric Hospital and Rehabilitation Centre, Thursday, she beamed with smile, apparently thinking the visit was to inform her about her new apartment.

But the contrary response gave way to a crestfallen expression.

She, therefore, appealed to Nigerians to help her get accommodation.

She said, “please help use your medium to beg Nigerians to assist me to get accommodation. I am not asking for much. I only need a room apartment where I can live with my daughter. I don’t want to go back to the bridge.”

With the assistance of Mr Obaraye, Blessing opened an account with the following details: BLESSING OKON, 0721307441 (account number) Guarantee Trust Bank, for Nigerians to assist her with funds to rent an apartment as the expiration of the two weeks extension of her stay at the hospital draws closer.