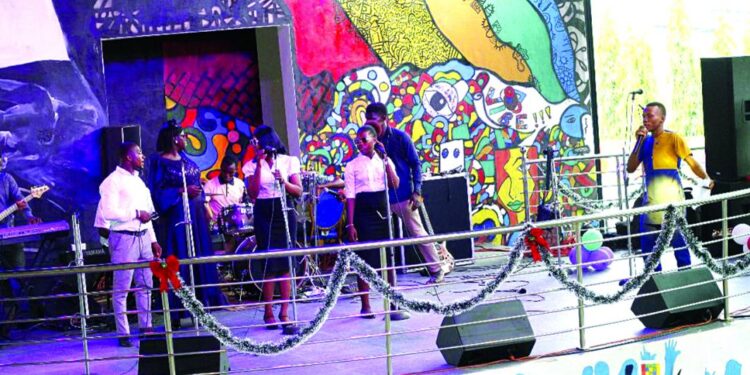 An arts and entertainment Centre, Dream Park and Gardens has opened in the Ikorodu area of Lagos State.

According to the Facility Chairman, Mr. Olawale Afolabi, the park has provisions for theatre performance, musical concerts, art exhibitions, a gymnasium for physical fitness and an environment where children, as well as adults, could read and play.

“There is also a cinema for movies, a swimming pool, water slides, and children indoor electronic games. There is a mini-golf centre, a football arena and an area where you could create the cultural scene of different countries of the world such as Korea, China and India. It is a total entertainment package for the family.”

Mrs. Atinuke Kuti, the Managing Director of Cinnamon Associates Ltd, who manages the children section of the facility, said, the Amphitheatre would be devoted to family entertainment, arts and culture.

‘’It is a recreational centre for youths. The park has several facilities, one of which is the computerised games section. A stage for theatre productions, musical concerts and a cinema. There is ample parking space for car owners, there is also an event centre.”

Kuti, who is more like a consultant to the facility, said it is a talents development, education through arts, entertainment and recreational centre. “There will also be enough opportunities for competitions, cinema, science and technological contents to motivate young people to pursue academic excellence. The centre has the capacity for over 1,000 people,” he said.

Afolabi recalled that the inspiration to build the centre arose from his disappointment in life.

According to him, he got married in 2000 and had his first kid in 2002, his second came in 2004 and then his wife passed on, leaving him with two children, a three-year-old kid and another, who was one. Her absence proved a challenge to him.

“I took those children as God’s gifts who needed to be nurtured properly and given quality education and opportunity to be entertained,” he said.

When they grew older, he started looking for a place where they could go for family bonding and recreation. I was looking for a secured and healthy environment for their overall wellbeing. To my surprise, I couldn’t get any in Ikorodu.’’

He said, “it was this challenge that inspired Dreampark and Gardens, a situation of misfortune leading to fortune. I started to think that there are many families like mine, not only in Ikorodu but also, all over the world, who are looking for good places to be entertained, places where they could bond and make friends.”

Afolabi said he started working on the project 13 years ago. “We started with four plots of land and later got 15 plots. This place is for family entertainment and bonding.”

Kuti who is also Montessori-trained consultant, believes that education must be balanced with play and entertainment to eradicate boredom so that children can assimilate faster.

Childe international portrays the life of a spoilt child, Titilayo. The message in the play is for young people to respect their parents and to never forget the African culture as they imbibe the European way of life as their lifestyle.

In a chat with one of the main acts, Emmanuel Adejumo, son of the late Moses Adejumo, aka Baba Sala, “the whole concept is brilliant. It provides a platform for artists to develop and express their talents. Every dancer, actor, the filmmaker has a place at Dreampark and Gardens because of the facilities provided.”

He, however, advised the management not to make entry fee too expensive for families so that as many people as possible can enjoy the entertainments and recreation at the centre.”

Another artiste, Omolayo Babawale, who performed African folk songs with a lot of percussions, said the new centre ‘’is a wonderful platform. I see this venue as a blessing for artists and families. It is also a platform to express our culture. This is so important because any child that comes here will see the world at large in a better light.”

Omotayo was one of the finalists of MTN Project Fame West Africa in 2013. Other performing artists include Bayo Adesuyi, Funmi Olapade, Doyin Olatuyi and many others.