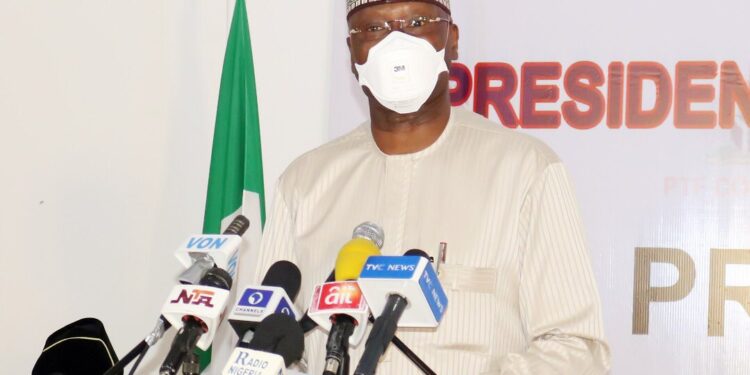 The Federal Government has reset the nationwide curfew to now restrict movement between the hours of 12 midnight and 4 a.m., as part of measures to curb the spread of the Coronavirus.
The National Coordinator of the Presidential Taskforce on COVID-19, Dr Sani Aliyu, made this known during a briefing at the Nanmdi Azikwe International Airport, Abuja, on Thursday.

Aliyu said, “I will first of all start with general movement. We are modifying the curfew to commence from 12 midnight to 4am nationwide, effective from 12:00 tonight. This does not apply to people on essential services and international travellers that might be returning from abroad.”

Meanwhile the PTF also said that the National Youth Service Corps should start making preparations to reopen its orientation camps nationwide.
Recall that orientation camps across the country had been shut in March as part of measures to curb the spread of the coronavirus disease.
Aliy said that the task force was in the process of developing “strict guidelines” to forestall the outbreak of infections when NYSC camps reopen.

Aliyu said, “For the National Youth Service Corps, the NYSC is to consolidate on safety measures currently being put in place and start preparing for the reopening of orientation camps when educational institutions open.
“We are in the process of developing strict guidelines to ensure there is no outbreak of Covid-19 when this process starts.”
The Federal Government says state governments and school administrators should start making preparations for the full reopening of schools in the country.

In a related development, the task force recommended phased return of students.
Aliyu said, “For educational institutions which include daycare, primary, secondary and tertiary institutions. Educational institutions should begin the process of working towards potentially reopening within this phase.
“However, we strongly recommend that states conduct risk assessment to ensure all schools are at a level of compliance and create a monitoring mechanism to assess, create, and monitor this level of preparedness.
“Meanwhile, all daycares and educational institutions are to remain closed to in-classes until this level of risk is assessed. And if there will be opening of schools, it must be staged and preferably carried out in phases to ensure that this does not pose a risk to the general public and in particular to vulnerable groups that might end up getting infected by students going back home.”

Meanwhile, the FG, during the briefing, also released the list of international airlines denied approval to operate in Nigerian airspace as international flights resume on Saturday.
The international airlines denied flying approval, according to the Minister of Aviation, Hadi Sirika, include Air France, KLM, Etihad, Rwandair, Lufthansa, TAAG Angola Airlines and others.
Some airlines were however denied approval because international flights were yet to resume in their countries.
They are Cape Verde and South African airlines.
The airlines given licence to operate include: Middle-East, British Airways, Delta airlines, Qatar Airways, Ethiopian Airlines, Egyptair, Air Peace, Virgin Atlantic, Asky, Africa World Airways (AWA), Air Cote-d’Ivoire, Kenya Airways, Emirate, and Turkish airlines.

In Lagos’ Airport the Egypt Air, Virgin Atlantic, Turkish Airlines, AWA, Kenya Airways and Middle East Airlines are permitted to operate into the Lagos airport, while in Abuja airports, British Airways, Emirates, Ethiopian, AWA, and Middle East Airlines as airlines allowed to operate.
They are expected to operate within COVID-19 protocols.
Sirika also issued further guidelines for arriving and departing international passengers.
He instructed that all intending travellers must have tested negative by the PCR, not more than four days prior to departure, while PCR tests would only be accepted from recognised centres worldwide.
The PTF also said that all intended travelers are required to register online and pay for their PCR test in nigeria before coming.
The PTF also stipulated penalties for people attempting to enter Nigeria without a negative PCR, says airline would bear costs in such cases.

‘Recreation Centres: Bars To Remain Shut As Cinemas, Event Centres Reopen’
Further, the PTF okayed cinemas and event Centes to reopen, at “5 percent capacity”, while amusement parks and gyms are also allowed to open at limited capacities.
However, bars and nightclubs remain closed till further notice.