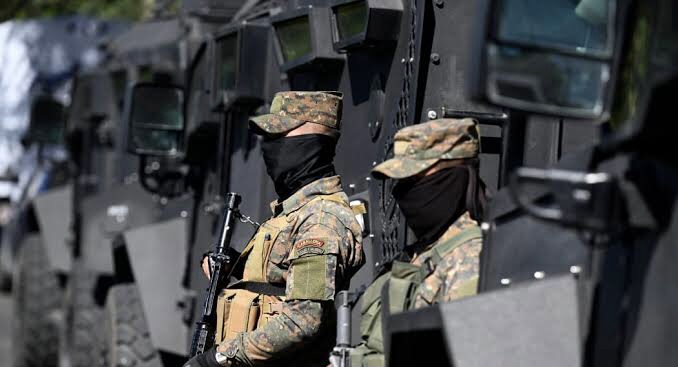 Around 10,000 troops have surrounded the city of Soyapango in El Salvador as part of a massive crackdown on gangs, President Nayib Bukele has announced.

All roads leading to the city have been blocked, and special forces have been searching houses for gang members.

Officers have also been stopping everyone attempting to leave the city and checking identity papers.

The operation is part of a massive crackdown on gangs after a surge in violence earlier this year.

The justice minister said 12 people had been arrested so far.

Soyapango is one of El Salvador’s largest cities and is home to more than 290,000 people. The city – which sits just 13 km (8 miles) west of the capital San Salvador – has long been known as a hub for gang activity.

“As of this moment, the municipality of Soyapango is totally surrounded,” President Bukele wrote on Twitter. “Extraction teams from the police and the army are tasked with extricating all the gang members still there one by one.”

He added that ordinary people “have nothing to fear” and said that the crackdown was part of “an operation against criminals, not against honest citizens”.

Images released by the government showed heavily armed troops clad in body armour and carrying assault rifles outside the city.

One resident, Guadalupe Perez, told the AFP news agency that the raid had come as a welcome surprise.

“They search you and ask for your identity papers to verify where you live, but that’s fine – it’s all for our safety,” the 53-year-old said.

Since Mr Bukele announced a state of emergency in late March, more than 58,000 people have been jailed by authorities in the country of 6.5 million people.

Rights groups have criticised the heavy handed nature of the crackdown, saying the measures, which allow police to arrest suspects without warrants, have led to arbitrary detentions.

But Mr Bukele’s allies say the crackdown is necessary after a wave of homicides culminated with gangs being blamed for 62 murders in a single day on 26 March.

A recent poll taken by the Central American University (UCA) found that 75.9 percent of Salvadorans approved of the state of emergency.