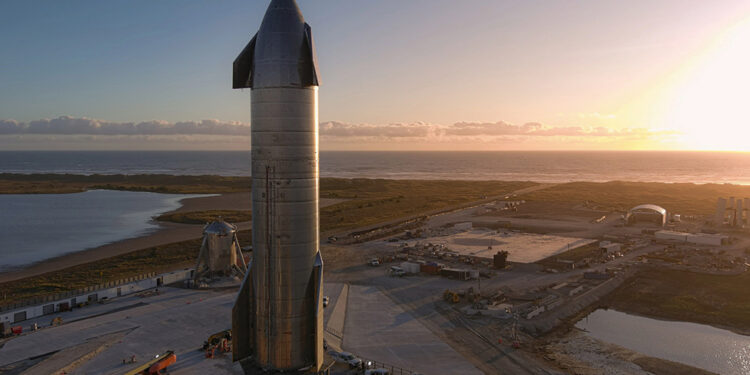 US entrepreneur Elon Musk has launched the latest prototype of his Starship vehicle from Texas.

Codenamed SN8, the uncrewed rocket lifted away from the Boca Chica R&D facility on what had been billed as a brief flight to 12.5km (41,000ft).

The 50m-tall vehicle crashed on touchdown but Mr Musk was delighted with how much the test outing achieved.

Before the flight, the tech billionaire had dampened expectations, warning his fans that some mishap was likely.

Nonetheless, Musk has big hopes for the Starship when it is fully developed. He says it is the future for his SpaceX company.

Starship will launch people and cargo into orbit, and the entrepreneur also envisages the vehicle travelling to the Moon and Mars.

The SpaceX CEO praised his team, adding that the demonstration had acquired “all the data we needed”.

The Boca Chica facility has developed a line of ever-more complex prototypes. The philosophy has been to test each iteration until it fails. Sometimes explosively.

SN8 was the first to attempt a high-altitude suborbital flight.

The plan had been to test out some manoeuvres that mimicked a belly-facing re-entry to Earth’s atmosphere, ending up with a flip back to the vertical just before touchdown.

Most of this was achieved: a clean launch off the pad, a steady climb to altitude, followed by a horizontal descent. But it was when the Starship tried to flip back to the vertical that things started to go wrong.

The vehicle came into its landing pad with too much speed, and promptly exploded on impact.

“RUD” stands for “rapid unscheduled disassembly”. A crash, in other words.

Mr Musk will move swiftly on. He already has other prototypes at Boca Chica ready to take SN8’s place.

Visually, SN8 looked quite different from the test articles that had gone before it.

The new vehicle was given three of SpaceX’s latest methane-burning Raptor engines, a nose cone and aerodynamic control surfaces – the large flaps at its top and base.

The Starship will eventually launch atop a booster called the Super Heavy.

This will feature perhaps 28 Raptors, producing more than 70 meganewtons (16 million lbs) of thrust. That’s much more than even the mighty Apollo Saturn 5 rocket, which sent men to the Moon.

Both parts of the new SpaceX system – Starship and Super Heavy booster – will stand 118m tall on the launch pad.

The two elements are being designed to be fully reusable, making propulsive landings at the end of each mission.

In June this year, Mr Musk stated that Starship was now his number-one priority, beyond the Falcon rockets he currently routinely flies for satellite companies, the US Air Force and the US space agency (Nasa).

He believes the Starship concept can transform the economics of spaceflight.

The specifications call for more than 100-tonnes to be lifted into low-Earth orbit.

This mass could include satellites, people and even hardware to build bases on the Moon and Mars.

Nasa has already asked Mr Musk to examine the possibility of landing a Starship on the lunar surface in the next few years.

The entrepreneur has in mind a higher objective and a faster timeline, however. Receiving an award last week from the Germany digital publishing group Axel Springer SE, he said he aimed to have people at Mars in the next four to six years.

The SpaceX CEO is famous for his aggressive and overly optimistic schedules. He does, however, have a habit of proving critics wrong by eventually attaining his goals.