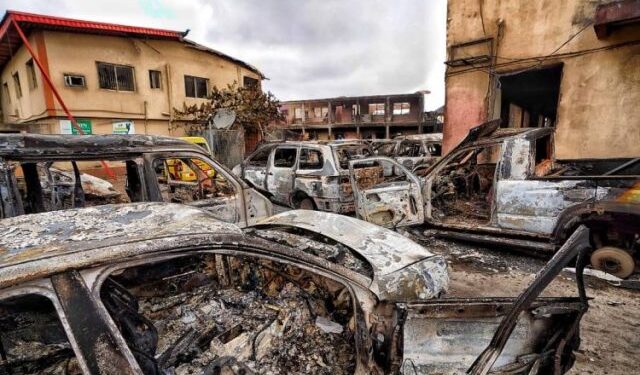 The Permanent Secretary/Auditor-General for Local Governments, Mrs. Adesumbo Abolarin has condemned the act of arson and vandalism during her visit to some Local Governments (LGs) and Local Council Development Areas (LCDAs) vandalised and burnt by hoodlums in the aftermath of the #EndSARS protests in the state.

Speaking during one of the visits, Mrs. Adesumbo Abolarin, disclosed that her visit was for on-the-spot assessment of the destruction of Council property across Lagos State as well as to commiserate with the management of affected LGs and LCDAs.

She condemned the act of the hoodlums, describing it as the most barbaric and uncivilised conduct anyone could think of, particularly when the State Government and the respective LGs were at the forefront of service delivery to the citizenry.

While informing that all the affected LGs and the LCDAs are presently grappling with operational difficulties caused by the wanton destruction, the Permanent Secretary urged the executive, management and staff to protect other critical assets while continuing to deliver more services to the people regardless of the temporary setback.