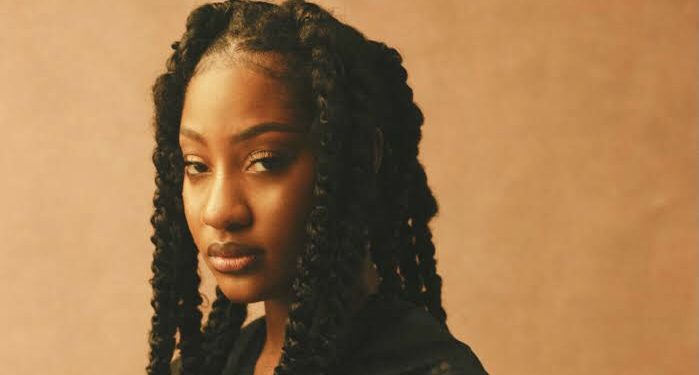 Award winning and talented singer, Tems is up to something great again. Six years since Rihanna’s critically acclaimed album ‘ANTI’, she has taken a much needed hiatus from releasing any solo music as the Barbadian singer delves into a plethora of business ventures.

With the exception of “BELIEVE IT” off PartyNextDoor’s ‘PARTYMOBILE’, Rihanna has steered away from the scene, dodging album enquires from interviews and her social media comments section. From Fenty Beauty, Fenty Skin and Savage x Fenty and recently Fenty Eau de Parfum and Savage x Fenty sport, Rihanna has proven to be a cultural icon far beyond the music industry.

Finally, the music and business mogul is making her come back to the scene with a single for ‘Black Panther 2: Wakanda Forever’.

“Lift Me Up”, the lead promotional single for the highly anticipated film, features writing credits from BET award winning singer and songwriter, TEMS. She is assisted by Rihanna, the film’s director, Ryan Coogler and Ludwig Görransson, Swedish composer and record producer for the ‘Black Panther:Wakanda Forever’. The track serves as a tribute to the life and legacy lived by the late Chadwick Boseman who played T’Challa in ‘Black Panther: Wakanda Forever’

Speaking about “Lift Me Up”, Tems says “After speaking with Ryan and hearing his direction for the film and the song, I wanted to write something that portrays a warm embrace from all the people that I have lost in my life. I tried to imagine what it would feel like if I could sing to them now and express how much I miss them.” On working with Rihanna, Tems shares, “Rihanna has been an amazing inspiration to me so hearing her convey this song is a great honour.”

The news of Tems’ collaboration, out October 28th, comes shortly after Nigeria was set to host the African premiere of ‘Black Panther 2: Wakanda Forever’ in Lagos and months after the release of the movie’s trailer which featured a cover of Bob Marley’s “No Woman, No Cry” by Tems. The track which was also accompanied by “A Body, A Coffin” performed by Ghanaian sensation, Amaarae.

Tems whose real name is Temilade Openiyi, has had a meteoric rise in her music career in the space of three years. The 27-year-old has become arguably the most sought after female Nigerian singer.

Due to her prowess, the music prodigy singer, songwriter, and record producer has done well for herself. She rose to prominence after she was featured on Wizkid’s 2020 single, “Essence”, which reached the top ten of the Billboard Hot 100 after the release of a remixed version with an additional feature from Justin Bieber, and earned her a Grammy Award nomination. That same year, she was featured on Drake’s song, “Fountains”.